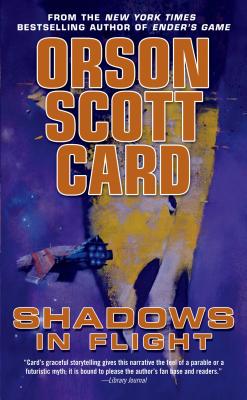 This is book number 5 in the The Shadow Series series.

Ender's Shadow explores the stars in this all-new novel...

At the end of Shadow of the Giant, Bean flees to the stars with three of his children--the three who share the engineered genes that gave him both hyper-intelligence and a short, cruel physical life. The time dilation granted by the speed of their travel gives Earth's scientists generations to seek a cure, to no avail. In time, they are forgotten--a fading ansible signal speaking of events lost to Earth's history. But the Delphikis are about to make a discovery that will let them save themselves, and perhaps all of humanity in days to come.

For there in space before them lies a derelict Formic colony ship. Aboard it, they will find both death and wonders--the life support that is failing on their own ship, room to grow, and labs in which to explore their own genetic anomaly and the mysterious disease that killed the ship's colony.

Shadows in Flight is the fifth novel in Orson Scott Card's Shadow Series.

The Second Formic War (with Aaron Johnston)
The Swarm / The Hive

Orson Scott Card is best known for his science fiction novel Ender's Game and its many sequels that expand the Ender Universe into the far future and the near past. Those books are organized into the Ender Saga, which chronicles the life of Ender Wiggin; the Shadow Series, which follows on the novel Ender's Shadow and is set on Earth; and the Formic Wars series, written with co-author Aaron Johnston, which tells of the terrible first contact between humans and the alien "Buggers." Card has been a working writer since the 1970s. Beginning with dozens of plays and musical comedies produced in the 1960s and 70s, Card's first published fiction appeared in 1977--the short story "Gert Fram" in the July issue of The Ensign, and the novelette version of "Ender's Game" in the August issue of Analog. The novel-length version of Ender's Game, published in 1984 and continuously in print since then, became the basis of the 2013 film, starring Asa Butterfield, Harrison Ford, Ben Kingsley, Hailee Steinfeld, Viola Davis, and Abigail Breslin.

Card was born in Washington state, and grew up in California, Arizona, and Utah. He served a mission for the LDS Church in Brazil in the early 1970s. Besides his writing, he runs occasional writers' workshops and directs plays. He frequently teaches writing and literature courses at Southern Virginia University.

He is the author many science fiction and fantasy novels, including the American frontier fantasy series "The Tales of Alvin Maker" (beginning with Seventh Son), and stand-alone novels like Pastwatch and Hart's Hope. He has collaborated with his daughter Emily Card on a manga series, Laddertop. He has also written contemporary thrillers like Empire and historical novels like the monumental Saints and the religious novels Sarah and Rachel and Leah. Card's work also includes the Mithermages books (Lost Gate, Gate Thief), contemporary magical fantasy for readers both young and old.

Card lives in Greensboro, North Carolina, with his wife, Kristine Allen Card. He and Kristine are the parents of five children and several grandchildren.

“Card's latest installment in his Shadow subseries…does a superlative job of dramatically portraying the maturing process of child into adult…. Card makes the important point that there's always more than one side to every issue. Fans will marvel at how subtly he has prepared for the clever resolution.” —Publishers Weekly, starred review, on Shadow of the Giant

“Shadow of the Giant is a fitting and satisfying continuation to the Ender series, although it is not a conclusion. Card...seems to indicate that he will at some point return to follow Bean's family and the other Battle School Children as they expand throughout the galaxy.” —SF Site.com

“Once again, Card keeps the action, danger, and intrigue levels high...paves the way for further Ender-Bean developments; and leaves his readers eagerly awaiting them.” —Booklist on Shadow Puppets