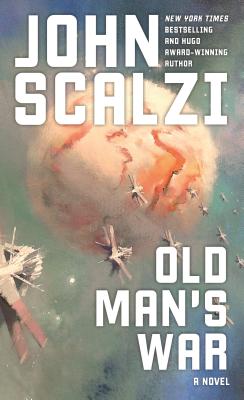 Like Starship Troopers (the movie) with subtler satire, or Space Cowboys (the movie) with more aliens. Geriatrics thrown into battle shouldn't be as funny and endearing as they are in Scalzi's imagination, in a future where at age 75 you can enlist in the Colonial Defense Forces, receive a new superathletic body, and kill aliens in foreign star systems. One of life's unfair asymmetries is that the young can't imagine what it's like to be old, while the old remember what it was like to be young. Scalzi blurs that line and makes aging seem like a blast.

Perfect for an entry-level sci-fi reader and the ideal addition to a veteran fan’s collection, John Scalzi's Old Man’s War will take audiences on a heart-stopping adventure into the far corners of the universe.

John Perry did two things on his 75th birthday. First he visited his wife's grave. Then he joined the army.

The good news is that humanity finally made it into interstellar space. The bad news is that planets fit to live on are scarce—and alien races willing to fight us for them are common. So: we fight. To defend Earth, and to stake our own claim to planetary real estate. Far from Earth, the war has been going on for decades: brutal, bloody, unyielding.

Earth itself is a backwater. The bulk of humanity's resources are in the hands of the Colonial Defense Force. Everybody knows that when you reach retirement age, you can join the CDF. They don't want young people; they want people who carry the knowledge and skills of decades of living. You'll be taken off Earth and never allowed to return. You'll serve two years at the front. And if you survive, you'll be given a generous homestead stake of your own, on one of our hard-won colony planets.

John Perry is taking that deal. He has only the vaguest idea what to expect. Because the actual fight, light-years from home, is far, far harder than he can imagine—and what he will become is far stranger.

“Though a lot of SF writers are more or less efficiently continuing the tradition of Robert A. Heinlein, Scalzi's astonishingly proficient first novel reads like an original work by the late grand master...This virtuoso debut pays tribute to SF's past while showing that well-worn tropes still can have real zip when they're approached with ingenuity.” —Publishers Weekly (starred review)

“Solid…[Scalzi] sidesteps most of the cliches of military science fiction, delivers fast-paced scenes of combat and pays attention to the science underpinning his premise.” —San Francisco Chronicle

“Gripping and surpassingly original. It's Starship Troopers without the lectures. It's The Forever War with better sex. It's funny, it's sad, and it's true.” —Cory Doctorow

“I enjoyed Old Man's War immensely. A space war story with fast action, vivid characters, moral complexity and cool speculative physics, set in a future you almost want to live into, and a universe you sincerely hope you don't live in already.” —Ken MacLeod