The Fall of Reza Shah: The Abdication, Exile, and Death of Modern Iran's Founder (Hardcover) 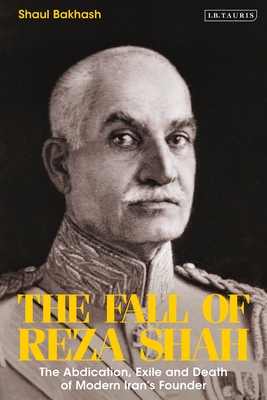 Reza Shah's authoritarian and modernising reign transformed Iran, but his rule and Iran's independence ended in ignominy in 1941. In this book, Shaul Bakhash tells the full story of the Anglo-Soviet invasion which led to his forced abdication, drawing upon previously unused sources to reveal for the first time that the British briefly, but seriously, toyed with the idea of doing away altogether with the ruling Pahlavis and considered reinstalling on the throne a little-regretted previous dynasty. Bakhash charts Reza Shah's final journey through Iran and into his unhappy exile; his life in exile, his reminiscences; his testy relationship with the British in Mauritius and Johannesburg; and the circumstances of his death. Additionally, it reveals the immense fortune Reza Shah amassed during his years in power, his finances in exile, and the drawn-out dispute over the settlement of his estate after his death.

A significant contribution to the literature on Reza Shah and British imperialism as it played out in the case of one critical country during World War II, the book reveals the fraught relationship between a once powerful ruler in his final days and the British government at a critical moment in recent history.

Shaul Bakhash is Clarence J. Robinson Professor of History at George Mason Univeristy, USA. He is the author of Iran: Monarchy, Bureaucracy and Reform Under the Qajars, 1858-1896 (1978); The Politics of Oil and Revolution in Iran (2010); and Reign of the Ayatollahs: Iran and the Islamic Revolution (1990). His articles have appeared in numerous scholarly journals and books, as well as in the New York Review of Books, Foreign Policy, The New Republic, the New York Times, the Washington Post, the Los Angeles Times and other newspapers.