The Creative Habit: Learn It and Use It for Life (Paperback) 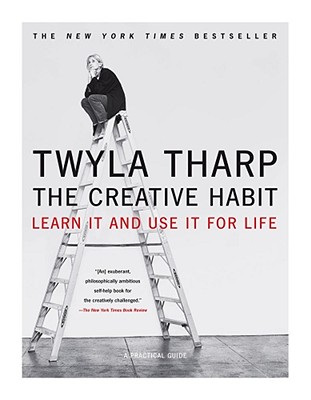 Twyla Tharp's stellar book is a powerful wrecking ball for demolishing a large array of artistic myths. She believes that great works are far more likely to be the product of long-standing habits rather than any singular, "divine" inspirations. This book will not teach you how to write a great novel, sell a good pitch, or land a leading role, but it will teach you something much harder: how to begin.

One of the world’s leading creative artists, choreographers, and creator of the smash-hit Broadway show, Movin’ Out, shares her secrets for developing and honing your creative talents—at once prescriptive and inspirational, a book to stand alongside The Artist’s Way and Bird by Bird.

All it takes to make creativity a part of your life is the willingness to make it a habit. It is the product of preparation and effort, and is within reach of everyone. Whether you are a painter, musician, businessperson, or simply an individual yearning to put your creativity to use, The Creative Habit provides you with thirty-two practical exercises based on the lessons Twyla Tharp has learned in her remarkable thirty-five-year career.

In "Where's Your Pencil?" Tharp reminds you to observe the world -- and get it down on paper. In "Coins and Chaos," she gives you an easy way to restore order and peace. In "Do a Verb," she turns your mind and body into coworkers. In "Build a Bridge to the Next Day," she shows you how to clean the clutter from your mind overnight.

Tharp leads you through the painful first steps of scratching for ideas, finding the spine of your work, and getting out of ruts and into productive grooves. The wide-open realm of possibilities can be energizing, and Twyla Tharp explains how to take a deep breath and begin...

Twyla Tharp, one of America’s greatest choreographers began her career in 1965, and has created more than 130 dances for her company as well as for the Joffrey Ballet, the New York City Ballet, the Paris Opera Ballet, London’s Royal Ballet, Denmark’s Royal Ballet, and American Ballet Theatre. She has won two Emmy Awards for television’s Baryshnikov by Tharp, and a Tony Award for the Broadway musical Movin’ Out. The recipient of a MacArthur Fellowship, she was inducted into the American Academy of Arts & Sciences in 1993 and was made an honorary member of the American Academy of Arts and Letters in 1997. She holds nineteen honorary degrees, most recently from Harvard University. She lives and works in New York City.

"[An] exuberant, philosophically ambitious self-help book for the creatively challenged."

"An entertaining 'how to' guide, The Creative Habit isn't about getting the lightning bolt of inspiration, but rather the artistic necessity of old-fashioned virtues such as discipline, preparation and routine."

"The Creative Habit emphasizes the work habits that lead to success."

"[A]s accessible, smart and eye-opening as her dance."

"Though its context is a choreographer's world, its principles are universally applicable and sound....It could change your life."