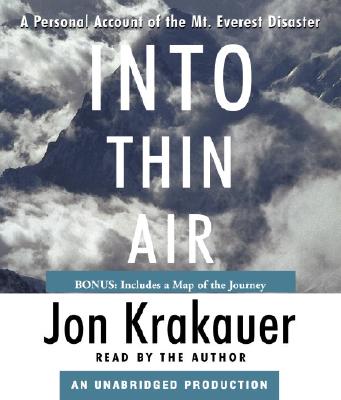 A bank of clouds was assembling on the not-so-distant horizon, but journalist-mountaineer Jon Krakauer, standing on the summit of Mt. Everest, saw nothing that "suggested that a murderous storm was bearing down." He was wrong. The storm, which claimed five lives and left countless more--including Krakauer's--in guilt-ridden disarray, would also provide the impetus for Into Thin Air, Krakauer's epic account of the May 1996 disaster.

Jon Krakauer is the author of Eiger Dreams, Into the Wild, Into Thin Air, Under the Banner of Heaven, Where Men Win Glory, Three Cups of Deceit, and Missoula: Rape and the Justice System in a College Town, among others. He is also the editor of the Modern Library Exploration series.


From the Hardcover edition.