The Boy in the Striped Pajamas (CD-Audio) 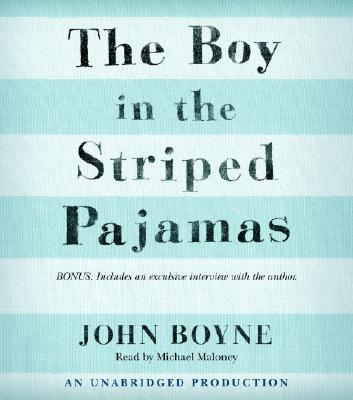 BONUS FEATURE: Conversation between the author and the editor, David Fickling.

When Bruno returns home from school one day, he discovers that his belongings are being packed in crates. His father has received a promotion and the family must move from their home to a new house far far away, where there is no one to play with and nothing to do. A tall fence running alongside stretches as far as the eye can see and cuts him off from the strange people he can see in the distance.

But Bruno longs to be an explorer and decides that there must be more to this desolate new place than meets the eye. While exploring his new environment, he meets another boy whose life and circumstances are very different to his own, and their meeting results in a friendship that has devastating consequences.

John Boyne was born in Ireland in 1971 and studied at Trinity College, Dublin, and the University of East Anglia, Norwich. His novels have been published in over forty languages, and his books for young readers include Noah Barleywater Runs Away and The Terrible Thing That Happened to Barnaby Brocket. The Boy in the Striped Pajamas won two Irish Book Awards, topped the New York Times bestseller list, and was adapted into a Miramax feature film. He lives in Dublin. To learn more, visit JohnBoyne.com.

"A memorable and moving story." -The Oxford Times (U.K.)

"A book so simple, so seemingly effortless, that it's almost perfect." -The Irish Independent

"An extraordinary book." -The Irish Examiner