Mysteries of the Middle Ages: The Rise of Feminism, Science and Art from the Cults of Catholic Europe (Compact Disc) 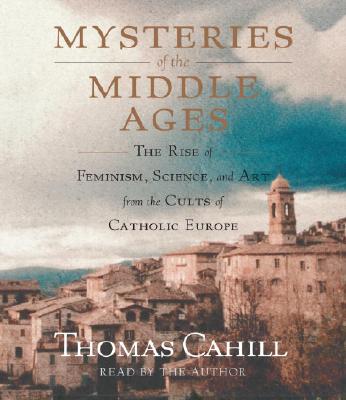 After the long period of cultural decline known as the Dark Ages, Europe experienced a rebirth of scholarship, art, literature, philosophy, and science and began to develop a vision of Western society that remains at the heart of Western civilization today.

By placing the image of the Virgin Mary at the center of their churches and their lives, medieval people exalted womanhood to a level unknown in any previous society. For the first time, men began to treat women with dignity and women took up professions that had always been closed to them.

The communion bread, believed to be the body of Jesus, encouraged the formulation of new questions in philosophy: Could reality be so fluid that one substance could be transformed into another? Could ordinary bread become a holy reality? Could mud become gold, as the alchemists believed? These new questions pushed the minds of medieval thinkers toward what would become modern science.

Artists began to ask themselves similar questions. How can we depict human anatomy so that it looks real to the viewer? How can we depict motion in a composition that never moves? How can two dimensions appear to be three? Medieval artists (and writers, too) invented the Western tradition of realism.

On visits to the great cities of Europe—monumental Rome; the intellectually explosive Paris of Peter Abelard and Thomas Aquinas; the hotbed of scientific study that was Oxford; and the incomparable Florence of Dante and Giotto—Cahill brilliantly captures the spirit of experimentation, the colorful pageantry, and the passionate pursuit of knowledge that built the foundations for the modern world.

Thomas Cahill's appealing approach to distant history has won the attention of millions of readers in North America and beyond. Cahill is the author of four previous volumes in the Hinges of History series: "How the Irish Saved Civilization," "The Gifts of the Jews," "Desire of the Everlasting Hills," and "Sailing the Wine-Dark Sea." They have been bestsellers, not only in the United States but also in countries ranging from Italy to Brazil. He and his wife, Susan, also a writer, divide their time between New York and Rome. "From the Trade Paperback edition."

"Like a favorite college professor who could make any subject fascinating and understandable, Thomas Cahill takes us on an intoxicating journey through medieval Europe in Mysteries of the Middle Ages. Throughout it all, you are keenly aware that the author wants you to fall in love with this pivotal period in Western civilization every bit as much as he did....Cahill spans centuries of history beautifully and seamlessly, giving readers a lovingly painted picture of the high Middle Ages and how its sensibilities evolved to shape ours today."
--The Los Angeles Times

Praise for Sailing the Wine-Dark Sea

“Fascinating…Commendable…Cahill has an impressive knowledge of the Greek world.…His admirable skill at summing up movements of enormous complexity surfaces throughout the book.”
—Seattle Times

“Astonishing…If anybody can get us reading about Homer, Plato, Socrates, Aristotle, Thucydides, Xenophon and more, Cahill will.”
—Chicago Tribune


Praise for Desire of the Everlasting Hills

“Each of [Cahill’s] books offers moments of genuine insight into the workings of culture, literature, and the human heart.”
—Commonweal

“With grace, skill, and erudition, he summarizes obtuse semantic and historical arguments, highlights the findings most relevant to lay readers, and draws disparate material together in his portraits of Jesus, his mother, Mary, and the apostle Paul.”
—Washington Post Book World


Praise for The Gifts of the Jews

“Captivating…Persuasive as well as entertaining…Mr. Cahill’s book is a gift.”
—New York Times

“Cahill’s clearly voiced, jubilant song of praise to the gifts of the Jews is itself a gift—a splendid story, well told.”
—Boston Globe

Praise for How the Irish Saved Civilization