Into the Hands of the Soldiers: Freedom and Chaos in Egypt and the Middle East (Paperback) 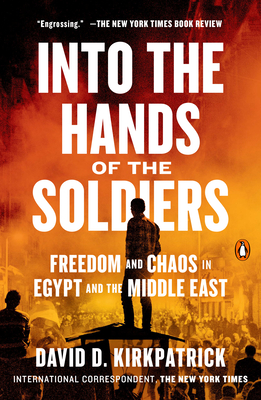 ONE OF THE ECONOMIST'S BOOKS OF THE YEAR

David D. Kirkpatrick, a correspondent for The New York Times, was banned from Egypt for writing this book: the definitive account of the turn back toward authoritarianism in Cairo and across the Middle East.

Egypt has long set the paradigm for Arab autocracy. It is the keeper of the peace with Israel and the cornerstone of the American-backed regional order. So when Egyptians rose up to demand democracy in 2011, their thirty months of freedom convulsed the whole region.

Now a new strongman, Abdel Fattah el-Sisi, is building a dictatorship so severe some call it totalitarian. The economy sputters, an insurgency simmers, Christians suffer, and the Israeli military has been forced to intervene. But some in Washington—including President Trump—applaud Sisi as a crucial ally.

Kirkpatrick lived with his family in Cairo through the revolution, the coup and the bloodshed that followed. Then he returned to Washington to uncover the American role in the tragedy. His heartbreaking story is essential to understanding the Middle East today.

David D. Kirkpatrick is an international correspondent for the New York Times and was Cairo bureau chief from 2011 through 2015. He is currently based in London. This is his first book.

"This street-level account of the Egyptian revolution and its aftermath combines memoir, reportage, and analysis...Kirkpatrick’s most valuable insights come from interviews given, years later, by Obama Administration officials."
—The New Yorker

"Kirkpatrick describes these tumultuous times in compelling detail. The author is honest about how hard it was to interpret events, grasp the motives of people such as Sisi and Morsi and predict the direction in which Egypt was heading...But Kirkpatrick, who dodged bullets and official harassment, deciphered the mystery."
—The Economist

"What [Kirkpatrick] has written is a tragedy, not only in the sense of a dreadful mishap, but in the Greek sense of a terrible fate that the hero has provoked yet cannot or will not see--though we in the audience can. It's an account that fills us with terror and pity."
—The Wall Street Journal

"This new book by David Kirkpatrick is the best account I have read of what happened in Egypt from Mubarak to Sisi."
—Ben Rhodes, author of The World as It Is (via Twitter)

“A first-hand account of the failure of democracy to take root in Egypt and the region . . . Kirkpatrick grapples thoughtfully with events he witnessed . . . [and] meticulously chronicles Mubarak’s downfall and the coup that ousted Mohamed Morsi – Egypt’s first freely elected leader and a member of the Muslim Brotherhood – barely a year after he took office in 2012."
—The Guardian

“[An] engrossing account of [Kirkpatrick’s] time as the New York Times Cairo bureau chief covering the Egyptian revolution...He brings two new contributions to his retelling...The Times’s extraordinary access to decision makers...[and] his willingness to plunge into the messy, sprawling street violence, and show how each side could perceive itself a victim and step up its own provocative tactics in response.”
—The New York Times Book Review

"An eye-opening account of the most tumultuous years in the modern history of Egypt. It is not easy to write current history as dispassionately as Kirkpatrick has done. It will change the way you think about Egypt and the Arab world."
—The Washington BookReview

“It is rare to come across a book on Egypt that is steeped in so much knowledge, experience, and true understanding of the complex forces that led to the so-called Arab Spring, and resulted in its slow demise. David Kirkpatrick has written an extraordinary book - one that sheds much-needed light on the religious, political, and economic conflicts roiling one of the most important countries in the Middle East."
—Reza Aslan, author of God: A Human Story

"With this sweeping, passionate, street-level chronicle of Egypt's years of hopeful popular uprising and crushing betrayal by the entrenched forces of corruption and violence, and by Washington's cynical complicity, David Kirkpatrick gives us an essential work of reportage for our time.”
—Philip Gourevitch, author of We Wish to Inform You That Tomorrow We Will Be Killed with Our Families

“David Kirkpatrick landed in Cairo as the New York Times Bureau chief on the eve of revolution. Into the Hands of the Soldiers is his gripping narrative of the tumultuous years that followed, in which he was often in the eye of the storm. Observant, eloquent and empathetic, he's the perfect guide to the perplexing and sometimes heart-breaking events that snuffed out the democratic hopes of the Arab spring. This is the rare non-fiction book that's as entertaining as it is informative.”
—James B. Stewart, author of Tangled Webs and The Heart of a Soldier

“With compelling anecdotes, David Kirkpatrick walks us through the labyrinth of Egyptian politics, military rule, the quixotic judicial system, and grassroots feminism. This book is both astute and insightful, and often as comical as it is tragic.”
—Lynsey Addario, author of It’s What I Do

“This fast-paced account of upheaval in the Arab world reflects the depth of understanding that can only come from ground-level reporting. Kirkpatrick watched a historic popular uprising unfold.  In this book, he brings the story to vivid life through the eyes of both poor and powerful.”
—Stephen Kinzer, author of All the Shah’s Men

"This will be the must read on the destruction of Egypt’s revolution and democratic moment."
—Sarah Leah Whitson, Middle East director of Human Rights Watch

“A twenty-first-century successor to William Shirer's Berlin Diary: a first-rate reporter's riveting eyewitness account of the unfolding of a world-historical tragedy. Kirkpatrick has an uncanny ability to lend a sense of real-time suspense to events in the recent past, and to get to the truth of a dauntingly elusive story.”
—Nicholas Lemann, author of The Promised Land