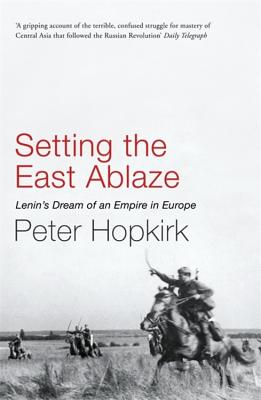 'Let us turn our faces towards Asia', exhorted Lenin when the long-awaited revolution in Europe failed to materialize. 'The East will help us conquer the West.'

Peter Hopkirk's book tells for the first time the story of the Bolshevik attempt to set the East ablaze with the heady new gospel of Marxism. Lenin's dream was to liberate the whole of Asia, but his starting point was British India. A shadowy undeclared war followed.

Among the players in this new Great Game were British spies, Communist revolutionaries, Muslim visionaries and Chinese warlords - as well as a White Russian baron who roasted his Bolshevik captives alive.

Here is an extraordinary tale of intrigue and treachery, barbarism and civil war, whose violent repercussions continue to be felt in Central Asia today.

Peter Hopkirk travelled widely in the regions where his six books are set - Central Asia, the Caucasus, China, India and Pakistan, Iran, and Eastern Turkey. He worked as an ITN reporter, the New York correspondent of the old Daily Express, and - for twenty years - on The Times. No stranger to misadventure, he was twice held in secret police cells and was also hijacked by Arab terrorists. His works have been translated into fourteen languages.

'The stuff of a dozen adventure movies . . . everything a ripping good yarn should be'—New York Times