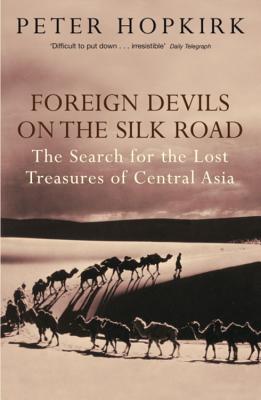 By Peter Hopkirk
$19.99
This book is out of stock indefinitely, unable to order at this time.

The Silk Road, which linked imperial Rome and distant China, was once the greatest thoroughfare on earth. Along it travelled precious cargoes of silk, gold and ivory, as well as revolutionary new ideas. Its oasis towns blossomed into thriving centres of Buddhist art and learning.

In time it began to decline. The traffic slowed, the merchants left and finally its towns vanished beneath the desert sands to be forgotten for a thousand years. But legends grew up of lost cities filled with treasures and guarded by demons. In the early years of the last century foreign explorers began to investigate these legends, and very soon an international race began for the art treasures of the Silk Road. Huge wall paintings, sculptures and priceless manuscripts were carried away, literally by the ton, and are today scattered through the museums of a dozen countries.

Peter Hopkirk tells the story of the intrepid men who, at great personal risk, led these long-range archaeological raids, incurring the undying wrath of the Chinese.

Peter Hopkirk travelled widely in the regions where his six books are set - Central Asia, the Caucasus, China, India and Pakistan, Iran, and Eastern Turkey. He worked as an ITN reporter, the New York correspondent of the old Daily Express, and - for twenty years - on The Times. No stranger to misadventure, he was twice held in secret police cells and was also hijacked by Arab terrorists. His works have been translated into fourteen languages.

'Recounted with great skill . . . opens a window onto a fascinating world'—Financial Times