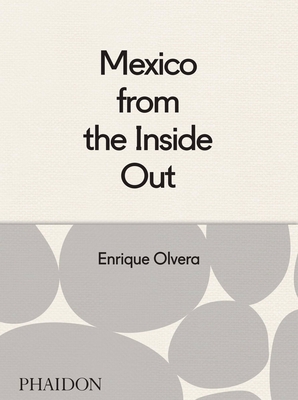 By Enrique Olvera, Araceli Paz (By (photographer)), Alice Waters (Contributions by)
$59.95
On Our Shelves

As featured on Good Morning America.

Enrique Olvera is the most famous and celebrated Mexican chef working today. Olvera's restaurant Pujol was ranked #1 in Mexico and #20 in the world at the World's 50 Best Restaurant Awards. This is his first book and the first ever high-end chef cookbook in English on Mexican cuisine. It captures and presents a new contemporary Mexican style of food, rooted in tradition but forward thinking in its modern approach. Olvera has pioneered and defined this new way of cooking and belongs to a global group of gourmet influencers that includes Noma's René Redzepi, Dom's Alex Attala, Osteria Francescana's Massimo Bottura and elBulli's legendary Ferran Adrià.

Olvera rethinks how to use traditional, authentic local ingredients using unusual flavor combinations to create a reinvented way of cooking and eating. Mexico from the Inside Out includes both sophisticated and more accessible recipes to explain Enrique's philosophy, vision, and process. He is fueled by a constant exploration of Mexico's ingredients and culinary history, and inspired by his early family memories about food. This book goes beyond stereotypes to reveal new possibilities of Mexican cuisine, which is now an essential part of the international conversation about gastronomy.

Features:
–Over 65 recipes, each with an elegant photograph, from the sophisticated dishes served at Pujol to more accessible casual dishes that he enjoys with his family at home.
–More than 100 atmospheric photographs capture the vivid mosaic of the Mexican landscape while tip-in pages bring the reader up close to Enrique's vision and philosophy about food.

Mexico from the Inside Out is the latest addition to Phaidon's bestselling and influential collection of cookbooks by the world's most exciting chefs.

Enrique Olvera graduated from the Culinary Institute of America in 1999. In 2000, at the age of 24, he opened Pujol in Mexico City. Enrique is constantly exploring Mexico's ingredients and culinary history, and is inspired by his early memories of food. Food & Wine named him one of the "10 Next Chef Superstars" and Star Chefs' International Congress named him in the "Top 10 International Figures in World Gastronomy." Enrique also owns three outposts of Eno, a casual eatery in Mexico City; Manta, in Los Cabos; and Cosme in New York. He is the founder and force behind Mesamerica, the annual international food symposium. He also publishes Boomerang, a Spanish-language culinary magazine. Enrique lives in Mexico City and New York.

"The recipes here are defined by [Enrique's] dedication to detail and his fearless palate... Stunning photographs." —The New York Times Book Review

"Coffee-table worthy... The flavors seem to leap off the page." —The Star Tribune

"[A] look into the methods of one of the planet's most interesting culinary minds." —Los Angeles Times

"Enrique Olvera [is] one of the most respected chefs not just in Mexico but also in the world... He achieved this by connecting with his country's food traditions: respecting the simplicity of street food while pushing culinary boundaries." —Bloomberg.com

"Olvera's book is worth owning—even if just for a look inside one of the more creative food-minds of our time." —Departures.com

"A stunning volume, filled with vibrant photos... The short essays scattered throughout give a glimpse into the life of a captivating chef and his view on one of the world's most compelling (and perhaps misunderstood) cuisines." —Eater

"Olvera is the face of modern Mexican cooking, the highest-profile chef with the biggest rated restaurants." — Observer Food Monthly

"Enrique Olvera's Pujol tops pretty much every list when it comes to dining in Mexico City... Full of surprises. A must-do when in town." —Goop

"Pujol, even at 15 years old, is as hard to get into as Rapunzel's high tower." —Tamar Adler, Vogue on Pujol

"What distinguishes Cosme from all - and from Rosa Mexicano and Dos Caminos in New York, or Frontera Grill and Topolobampo in Chicago, which lean toward fusion cuisine served by waiters obliged to make guacamole tableside - is Enrique's culinary credibility. Enrique isn't "inspired by" Mexican food. It is his soil and his roots." —Tamar Adler, Vogue on Enrique Olvera

"Meet one of the best chefs in the world, and the person who least wants me to call him that." —Andoni Aduriz on Enrique Olvera, Vogue

"Food is a way of communicating. I think a lot of modern chefs think that cooking is more an art form and about ideas. I don't." —Enrique Olvera in Vogue

"Enrique's cooking is a beautiful and delicious interpretation of Mexico's rich culture and traditions. He is both an innovator and a purist: thinking globally, acting locally, and always honoring the farmers and the community that surround him." —Alice Waters on Enrique Olvera