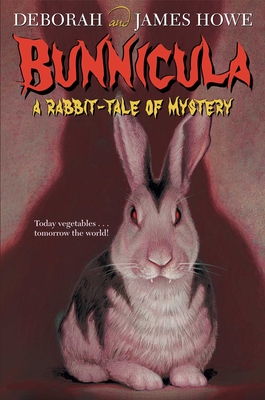 THIS book is written by Harold. His full time occupation is dog. He lives with Mr. and Mrs. X (here called Monroe) and their sons Toby and Pete. Also sharing the home are a cat named Chester and a rabbit named Bunnicula. It is because of Bunnicula that Harold turned to writing. Someone had to tell the full story of what happened in the Monroe household after the rabbit arrived.
It all began when the Monroes went to see the movie Dracula At the theater Toby found something on his seatÑa baby rabbit that he took home and named Bunnicula. It proved to be an apt name, at least as far as Chester was concerned. A well-read and observant cat, he soon decided that there was something odd about the newcomer. For one thing he seemed to have fangs. And the odd markings on his back looked a little like a cape. Furthermore, Bunnicula slept from sunup to sundown. He was awake only at night.
When the family started funding white vegetables, drained dry, with two fang marks in them, Chester was sure Bunnicula was a vampire. But what to do about it. None of the family seemed to grasp the trouble, and Chester's hilarious hints were totally misunderstood.
Was Bunnicula really a vampire? Only Bunnicula knows for sure. But the story of Chester's suspicions and their consequences makes uproarious reading.

James Howe is the author of more than ninety books for young readers. Bunnicula, coauthored by his late wife Deborah and published in 1979, is considered a modern classic of children’s literature. The author has written six highly popular sequels, along with the spinoff series Tales from the House of Bunnicula and Bunnicula and Friends. Among his other books are picture books such as Horace and Morris but Mostly Dolores and beginning reader series that include the Pinky and Rex and Houndsley and Catina books. He has also written for older readers. The Misfits, published in 2001, inspired the nationwide antibullying initiative No Name-Calling Week, as well as three sequels, Totally Joe, Addie on the Inside, and Also Known as Elvis. A common theme in James Howe’s books from preschool through teens is the acceptance of difference and being true to oneself. Visit him online at JamesHowe.com.

"Bunnicula is the kind of story that does not age, and in all probability, will never die. Or stay dead, anyway..."

"The most lovable vampire of all time."

"Move over, Dracula! This mystery-comedy is sure to delight."