The Custom of the Country (Paperback) 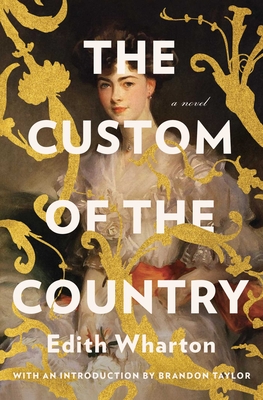 Names, places, technology, pomp, and circumstance may change with time but society's need for gossip and the innately human urge to climb the ladder remains immortal in one of Wharton's most readable novels.

“For my money, no literary antiheroine can best Undine.” —Jia Tolentino, The New Yorker

Edith Wharton’s compulsively readable 20th century classic about the conquests of Undine Spragg, the glamorous and insatiable social climber—now with a new introduction by Brandon Taylor.

Undine Spragg is beautiful—anyone in New York will admit to as much. But what is the point of beauty if no one can see you? The Spraggs left the Midwest in search of a glamorous life for their daughter. Now, cooped up in a gilded uptown hotel they can barely afford, they begin to fear their move to the big city was for naught. But Undine is determined. And Undine always gets her way.

What follows is a tactical climb to the pinnacle of affluence and early 20th-century high society that will amaze and mortify. Witty and devasting, The Custom of the Country is an astute comedy of manners and a scathing satire of upper-class life that bites to this day. More than a century after its original publication, Edith Wharton’s 1913 masterpiece remains an un-put-downable showcase for one of the most memorable, controversial anti-heroines in American literature.

Edith Wharton (1862–1937) was an American novelist—the first woman to win a Pulitzer Prize for her novel The Age of Innocence in 1921—as well as a short story writer, playwright, designer, reporter, and poet. Her other works include Ethan Frome, The House of Mirth, and Roman Fever and Other Stories. Born into one of New York’s elite families, she drew upon her knowledge of upper-class aristocracy to realistically portray the lives and morals of the Gilded Age.

Praise for Edith Wharton and Custom of the Country

“For my money, no literary antiheroine can best Undine… Wharton’s portrait of [her] is so acute that it frequently flickers across time into the contemporary.”—Jia Tolentino, The New Yorker

“Prescient… In this new Gilded Age, when the disparities between rich and poor are again, and disastrously, as great as they were in Wharton’s time, we could do with such a novelist, a cultural anthropologist who might hold up a mirror to our failings and our future, with eagle-eyed clarity and a small measure of compassion.”—Claire Messud, The New York Times Style Magazine

“There are only three or four American novelists who can be thought of as ‘major,’ and Edith Wharton is one.”—Gore Vidal

“Wharton is an amusingly ruthless observer of the manners and mores of the wealthy.”—Jay McInerney, The Week