A Life in Letters: A New Collection Edited and Annotated by Matthew J. Bruccoli (Paperback) 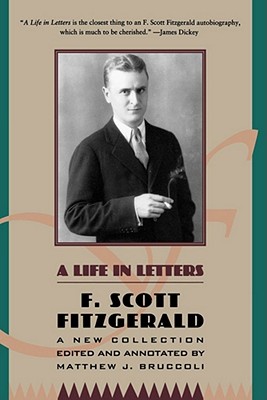 It's always nice to discover that one of your favorite writers is also a decent human being. Meeting Fitzgerald via his letters felt like the opposite experience. Fitzgerald's disdain for the distractions he himself was unable to resist becomes clearest in the letters to his daughter, Frances Scott. Overbearing, relentlessly critical (and written with his usual flair for the perfect cadence) they show his concern that she not embrace a world of cheap thrills and "beautiful little fools." What makes this so compelling is that Fitzgerald could well be talking to himself.

A vibrant self-portrait of an artist whose work was his life.
In this new collection of F. Scott Fitzgerald's letters, edited by leading Fitzgerald scholar and biographer Matthew J. Bruccoli, we see through his own words the artistic and emotional maturation of one of America's most enduring and elegant authors. A Life in Letters is the most comprehensive volume of Fitzgerald's letters -- many of them appearing in print for the first time. The fullness of the selection and the chronological arrangement make this collection the closest thing to an autobiography that Fitzgerald ever wrote.
While many readers are familiar with Fitzgerald's legendary "jazz age" social life and his friendships with Ernest Hemingway, Gertrude Stein, Edmund Wilson, and other famous authors, few are aware of his writings about his life and his views on writing. Letters to his editor Maxwell Perkins illustrate the development of Fitzgerald's literary sensibility; those to his friend and competitor Ernest Hemingway reveal their difficult relationship. The most poignant letters here were written to his wife, Zelda, from the time of their courtship in Montgomery, Alabama, during World War I to her extended convalescence in a sanatorium near Asheville, North Carolina. Fitzgerald is by turns affectionate and proud in his letters to his daughter, Scottie, at college in the East while he was struggling in Hollywood.
For readers who think primarily of Fitzgerald as a hard-drinking playboy for whom writing was effortless, these letters show his serious, painstaking concerns with creating realistic, durable art.

F. Scott Fitzgerald was born in St. Paul, Minnesota, in 1896. He attended Princeton University, joined the United States Army during World War I, and published his first novel, This Side of Paradise, in 1920. That same year he married Zelda Sayre and for the next decade the couple lived in New York, Paris, and on the Riviera. Fitzgerald’s masterpieces include The Beautiful and Damned, The Great Gatsby, and Tender Is the Night. He died at the age of forty-four while working on The Last Tycoon. Fitzgerald’s fiction has secured his reputation as one of the most important American writers of the twentieth century.

James Dickey A Life in Letters is the closest thing to an F. Scott Fitzgerald autobiography, which is much to be cherished.