All for the Union: The Civil War Diary & Letters of Elisha Hunt Rhodes (Paperback) 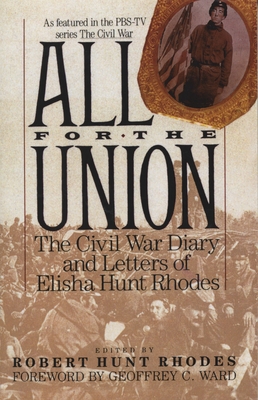 All for the Union is the eloquent and moving diary of Elisha Hunt Rhodes, featured throughout Ken Burns' PBS documentary The Civil War. Rhodes enlisted into the Union Army as a private in 1861 and left it four years later as a twenty-three-year-old colonel after fighting hard and honorably in battles from Bull Run to Appomattox. Anyone who heard these diaries excerpted in The Civil War will recognize his accounts of those campaigns, which remain outstanding for their clarity and detail. Most of all, Rhodes's words reveal the motivation of a common Yankee foot soldier, an otherwise ordinary young man who endured the rigors of combat and exhausting marches, short rations, fear, and homesickness for a salary of $13 a month and the satisfaction of giving "all for the union."

Elisha Hunt Rhodes was born in Cranston, Rhode Island, in 1842. He enlisted as a private in the Union Army in 1861. Four years later, he left the army as a twenty-three-year-old colonel, having fought in every campaign of the Army of the Potomac from Bull Run to Appomattox. After the war, he returned to his home state of Rhode Island and became a successful businessman. He remained active in military and veteran affairs, serving as the Brigadier General of the Brigade of Rhode Island Militia from 1879 to 1893 and acting as president of the Second Rhode Island Volunteers and Battery A Veterans Association. Rhodes died at the age of seventy-five on January 14, 1917.

"One of the best firsthand accounts I have read of campaigning and combat in the Civil War." -- James M. McPherson, author of Battle Cry of Freedom

"One of the most remarkable diaries I have ever read. Elisha Hunt Rhodes saw action from Bull Run to Appomattox and somehow survived, and his diary came to represent, better than any other I found, the spirit of the Union soldier." -- Ken Burns, director and writer of The Civil War