By Grand Central Station I Sat Down and Wept (Paperback) 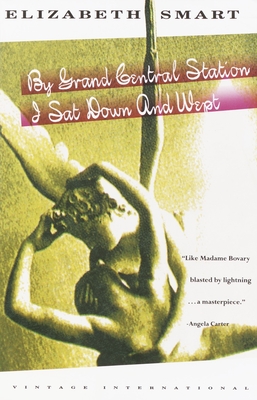 Smart is a literary saint of heartsick, conveying biblical psalms and gothic psychosomatics forward in time to the Smiths and their best executors. Her one and only masterpiece enacts an open diarism without incident, a private practice of style-for-survival; should its haughty loft and sacrificial ardor strike you maudlin, perhaps you are not obsessing over someone enough.

Originally published in 1945, this book of poetic prose encapsulates former journalist Elizabeth Smart’s relationship with poet George Barker. Instantly, upon picking up a book of his poetry while browsing through a London bookshop, Smart fell in love with the poet. They would soon begin an indulgent love affair during which she gave birth to four of his children. He, however, remained legally married to his wife. This tale of passionate but fanatical love is a modern reflection of the Romantic poets.
Accompanied in this edition by The Assumption of the Rogues and Rascals, a short novel that may be read as its sequel, By Grand Central Station I Sat Down and Wept has been hailed by critics worldwide as a work of sheer genius.

Elizabeth Smart was born in Ottawa,Canada, in 1913. She was educated at private schools in Canada and for a year at King's College, University of London.  One day, while browsing in a London bookshop, she chanced upon a slim volume of poetry by George Barker—and fell passionately in love with him through the printed word.  Eventually they communicated directly and, as a result of Barker's impecunious circumstances, Elizabeth Smart flew both him and his wife to the United States. Thus began one of the most extraordinary, intenese and ultimately tragic love affairs of our time. They never married but Elizabeth bore George Barker four children and their relationship provided the impassioned inspiration for one of the most moving and immediate chronicles of a love affair ever writtten—By Grand Central Station I Sat Down and Wept. Originally published in 1945, this remarkable work is now widely recognized as a classic work of poetic prose which has retained all of its searing poignancy, beauty and power of impact.
After the war, Elizabeth Smart supported herself and her family with journalism and advertising work. In 1963 she became literary and associate editor of Queen magazine but subsequently dropped out of the literary scene to live quietly in a remote part of Suffolk.  Elizabeth Smart died in 1986.

“Like Madame Bovary blasted by lightning . . . a masterpiece.” —Angela Carter

“A revelation . . . this, short, powerful work had a profound influence on me and was one of the factors that made me want to be a writer.” —Beryl Bainbridge

“Smart's language is her language . . . a writer of distinction with a unique voice and vision.” —Joyce Carol Oates