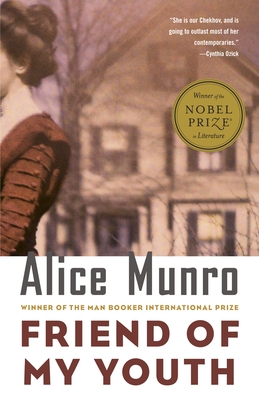 When Alice Munro won the Nobel Prize for Literature I asked my abuela (who has read every single one of her books) where I should start with her, and this is the one she lent to me. Now, six years later, I have finally read it, and my only regret is that I didn’t do it sooner. Here are 10 stories on women’s relationships with men (how they change and how they corrode) where Munro compacts novels into 30 pages, emotional climaxes into single sentences, each time making it seem effortless, weaving stories of not-quite-heartbreak that always leave a small pang in the chest regardless.

WINNER OF THE NOBEL PRIZE® IN LITERATURE 2013

The ten miraculously accomplished stories in Alice Munro's Friend of My Youth not only astonish and delight but also convey the unspoken mysteries at the heart of all human experience.

"[Friend of My Youth is] a wonderful collection of stories, beautifully written and deeply felt."--Michiko Kakutani, New York Times

Alice Munro grew up in Wingham, Ontario, and attended the University of Western Ontario. She has published thirteen collections of stories as well as a novel, Lives of Girls and Women, and two volumes of Selected Stories. During her distinguished career she has been the recipient of many awards and prizes, including three of Canada’s Governor General’s Literary Awards and two of its Giller Prizes, the Rea Award for the Short Story, the Lannan Literary Award, England’s W. H. Smith Book Award, the National Book Critics Circle Award, and the Man Booker International Prize. In 2013 she was awarded the Nobel Prize for Literature. Her stories have appeared in The New Yorker, The Atlantic Monthly, The Paris Review, Granta, and other publications, and her collections have been translated into thirteen languages. She lives in Clinton, Ontario, near Lake Huron.

“Her work felt revolutionary when I came to it, and it still does.” —Jhumpa Lahiri

“She is one of the handful of writers, some living, most dead, whom I have in mind when I say that fiction is my religion.” —Jonthan Franzen

“The authority she brings to the page is just lovely.” —Elizabeth Strout

“She’s the most savage writer I’ve ever read, also the most tender, the most honest, the most perceptive.” —Jeffery Eugenides

“Alice Munro can move characters through time in a way that no other writer can.”—Julian Barnes

“She is a short-story writer who…reimagined what a story can do.” —Loorie Moore

“There’s probably no one alive who’s better at the craft of the short story.” —Jim Shepard

“A true master of the form.” —Salman Rushdie