Poets and Pahlevans: A Journey into the Heart of Iran (Paperback) 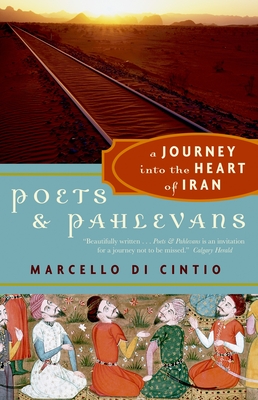 By Marcello Di Cintio
$16.95
Email or call for availability

Marcello Di Cintio prepares for his “journey into the heart of Iran” with the utmost diligence. He takes lessons in Farsi, researches Persian poetry and sharpens his wrestling skills by returning to the mat after a gap of some years. Knowing that there is a special relationship between heroic poetry and the various styles of traditional Persian wrestling, he sets out to discover how Iranians “reconcile creativity with combat.”

From the moment of his arrival in Tehran, the author is overwhelmed by hospitality. He immerses himself in male company in tea houses, conversing while smoking the qalyun or water pipe. Iranian men are only too willing to talk, especially about politics. Confusingly, he is told conflicting statements–that all Iranians love George Bush, that all Iranians hate George Bush; that life was infinitely better under the Shah, that the mullahs swept away the corruption of the Shah’s regime and made life better for all.

Once out of Tehran, he learns where the traditional forms of wrestling are practised. His path through the country is directed by a search for the variant disciplines and local techniques of wrestling and a need to visit sites and shrines associated with the great Persian poets: Hafez, Ferdosi, Omar Khayyám, Attar, Shahriyar and many others. Everywhere his quest leads him, he discovers that poetry is loved and quoted by everyone from taxi-drivers to students.

His engagement with Iranian culture is intimate: he wrestles (sometimes reluctantly) when invited, samples illegal home-brew alcohol, attends a wedding, joins mourners, learns a new way to drink tea and attempts to observe the Ramazan fast, though not a Muslim himself. Though he has inevitable brushes with officialdom, he never feels in danger, even when he hears that a Canadian photo-journalist has apparently been beaten to death in a police cell during the author’s visit. The outraged and horrified reaction of those around him to this violent act tightens the already close bond he has formed with the Persians.

His greatest frustration is that he is unable to converse freely with Iranian women aware that an important part of his picture of Iran is thus absent. Yet the mosaic of incidents, encounters, vistas, conversations, atmospheres and acutely observed sights, smells and moments creates a detailed impression of a country and society that will challenge most, if not all, preconceptions.

Later that year, Di Cintio travelled to West Africa with a volunteer organization, Canadian Crossroads International, and taught biology in a Ghanaian village for three months. (This would be the first and last time he used his science degree, much to his mother’s chagrin). When his volunteer placement was complete, Di Cintio travelled through western and northern Africa for nine months. His time amid the colour and heat of Africa led to a love affair with travel and resulted in his first book, Harmattan: Wind across West Africa, which won the Henry Kriesel Award for Best First Book and was also a finalist for the Wilfred Eggleston Prize for Best Nonfiction at the Alberta Book Awards.

In December 1999, hot with millennium fever, Di Cintio travelled to Jerusalem to watch the clock turn on 2000. He wandered throughout Israel and Egypt before returning to Calgary to begin his career as a freelance writer in earnest. Since then he has published articles in numerous magazines and literary journals including The Walrus, EnRoute, Geist and The Globe and Mail. His writing received several honours including the 2002 Maclean-Hunter Endowment Prize for Creative Nonfiction and a number of Western and National Magazine Award nominations.

Di Cintio travelled to Iran in the summer of 2003 seeking the connection between Persian poets and traditional wrestlers. This trip to Iran, and a subsequent return to the country the following year, yielded the stories that comprise Di Cintio’s new travel memoir, Poets & Pahlevans: A Journey into the Heart of Iran. Knopf Canada published Poets & Pahlevans in 2006.

“A fine, fine talent to be savoured.”
–Wayson Choy

“The worlds of poetry and Persian wrestling intersect in this captivating book. It’s a journey spiced with sweat and the scent of saffron.”
–Will Ferguson

“Travel is all about connecting, true, but Di Cintio’s headlocks and body slams take cross-cultural bonding to a new level. . . . Though its subject is wrestling, this is much more a book about putting your life in other people’s hands in an age of distrust.”
–The Globe and Mail