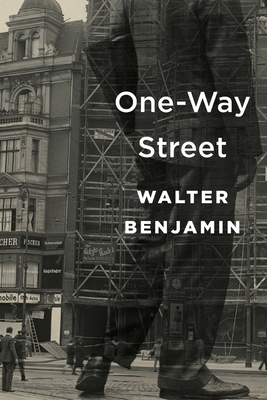 One-Way Street is a thoroughfare unlike anything else in literature--by turns exhilarating and bewildering, requiring mental agility and a special kind of urban literacy. Presented here in a new edition with expanded notes, this genre-defying meditation on the semiotics of late-1920s Weimar culture offers a fresh opportunity to encounter Walter Benjamin at his most virtuosic and experimental, writing in a vein that anticipates later masterpieces such as "On the Concept of History" and The Arcades Project.

Composed of sixty short prose pieces that vary wildly in style and theme, One-Way Street evokes a dense cityscape of shops, cafes, and apartments, alive with the hubbub of social interactions and papered over with public inscriptions of all kinds: advertisements, signs, posters, slogans. Benjamin avoids all semblance of linear narrative, enticing readers with a seemingly random sequence of aphorisms, reminiscences, jokes, off-the-cuff observations, dreamlike fantasias, serious philosophical inquiries, apparently unserious philosophical parodies, and trenchant political commentaries. Providing remarkable insight into the occluded meanings of everyday things, Benjamin time and again proves himself the unrivalled interpreter of what he called "the soul of the commodity." Despite the diversity of its individual sections, Benjamin's text is far from formless. Drawing on the avant-garde aesthetics of Dada, Constructivism, and Surrealism, its unusual construction implies a practice of reading that cannot be reduced to simple formulas. Still refractory, still radical, One-Way Street is a work in perpetual progress.