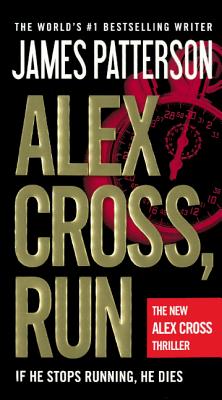 By James Patterson
$20.85
This book is out of stock indefinitely, unable to order at this time.

Detective Alex Cross arrests renowned plastic surgeon Elijah Creem for sleeping with teenage girls. Now, his life ruined, Creem is out of jail, and he's made sure that no one will recognize him--by giving himself a new face.
A young woman is found hanging from a sixth-floor window, and Alex is called to the scene. The victim recently gave birth, but the baby is nowhere to be found. Before Alex can begin searching for the missing newborn and killer, he's called to investigate a second crime. All of Washington, D.C., is in a panic, and when a third body is discovered, rumours of "three" serial killers send the city into an all-out frenzy.
Alex's investigations are going nowhere, and he's too focused on the cases to notice that someone has been watching him--and will stop at nothing until he's dead. With white-hot speed, relentless drama, and hairpin turns, ALEX CROSS, RUN is James Patterson's ultimate thrill ride.

James Patterson has had more "New York Times" bestsellers than any other writer, ever, according to "Guinness World Records." Since his first novel won the Edgar Award in 1977 James Patterson's books have sold more than 240 million copies. He is the author of the Alex Cross novels, the most popular detective series of the past twenty-five years, including "Kiss the Girls "and "Along Came a Spider." Mr. Patterson also writes the bestselling Women's Murder Club novels, set in San Francisco, and the top-selling New York detective series of all time, featuring Detective Michael Bennett. He writes full-time and lives in Florida with his family.