The Magnificent Lives of Marjorie Post: A Novel (Hardcover) 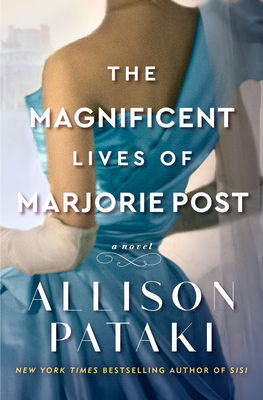 NATIONAL BESTSELLER • “Marvelous . . . I just had to be there with the Post cereal heiress through every twist and turn.”—Martha Hall Kelly, New York Times bestselling author of Lilac Girls

“New-money heiress Marjorie Post isn’t content to remain a society bride as she remakes herself into a savvy entrepreneur, a visionary philanthropist, a presidential hostess, and much more. Allison Pataki brings a towering legend to life.”—Kate Quinn, New York Times bestselling author of The Alice Network

Mrs. Post, the President and First Lady are here to see you. . . . So begins another average evening for Marjorie Merriweather Post. Presidents have come and gone, but she has hosted them all. Growing up in the modest farmlands of Battle Creek, Michigan, Marjorie was inspired by a few simple rules: always think for yourself, never take success for granted, and work hard—even when deemed American royalty, even while covered in imperial diamonds. Marjorie had an insatiable drive to live and love and to give more than she got. From crawling through Moscow warehouses to rescue the Tsar’s treasures to outrunning the Nazis in London, from serving the homeless of the Great Depression to entertaining Roosevelts, Kennedys, and Hollywood’s biggest stars, Marjorie Merriweather Post lived an epic life few could imagine.

Marjorie’s journey began gluing cereal boxes in her father’s barn as a young girl. No one could have predicted that C. W. Post’s Cereal Company would grow into the General Foods empire and reshape the American way of life, with Marjorie as its heiress and leading lady. Not content to stay in her prescribed roles of high-society wife, mother, and hostess, Marjorie dared to demand more, making history in the process. Before turning thirty she amassed millions, becoming the wealthiest woman in the United States. But it was her life-force, advocacy, passion, and adventurous spirit that led to her stunning legacy.

And yet Marjorie’s story, though full of beauty and grandeur, set in the palatial homes she built such as Mar-a-Lago, was equally marked by challenge and tumult. A wife four times over, Marjorie sought her happily-ever-after with the blue-blooded party boy who could not outrun his demons, the charismatic financier whose charm turned to betrayal, the international diplomat with a dark side, and the bon vivant whose shocking secrets would shake Marjorie and all of society. Marjorie did everything on a grand scale, especially when it came to love.

Bestselling and acclaimed author Allison Pataki has crafted an intimate portrait of a larger-than-life woman, a powerful story of one woman falling in love with her own voice and embracing her own power while shaping history in the process.

Allison Pataki is the New York Times bestselling author of The Traitor’s Wife, The Accidental Empress, Sisi, Where the Light Falls, and The Queen’s Fortune, as well as the nonfiction memoir Beauty in the Broken Places and two children’s books, Nelly Takes New York and Poppy Takes Paris. Allison’s novels have been translated into more than twenty languages. A former news writer and producer, Allison has written for The New York Times, ABC News, HuffPost, USA Today, Fox News, and other outlets. She has appeared on Today, Good Morning America, Fox & Friends, Good Day New York, Good Day Chicago, and MSNBC’s Morning Joe. Allison graduated cum laude from Yale University, is a member of The Historical Novel Society, and lives in New York with her husband and family.

“This is an absolutely terrific novel. If you want to know more about the twentieth century, it’s all here . . . and if you want to be inspired by a brilliant, gorgeous, and powerful woman, then Marjorie Post fits will fill the bill. . . . Pataki manages to make every chapter in this long and complicated life fascinating. Marjorie’s love life is as enthralling as it is heartbreaking. Her four successive husbands are unequal to the task of truly loving a woman of such wealth and power. She never admits defeat, however, and ultimately embodies the ideal of a true American hero.”—Historical Novel Society

“Allison Pataki takes the reader on a luxurious ride filled with jet-setting locales and opulent mansions, while deftly revealing how Marjorie Post’s humble beginnings fed her desire to become a new kind of heiress, forging her own way through the world and keenly aware of her legacy.”—Fiona Davis, New York Times bestselling author of The Lions of Fifth Avenue

“The Magnificent Lives of Marjorie Post is a richly detailed and impeccably researched triumph. Historical fiction readers will love this immersive and sweeping tribute to the fascinating Marjorie Merriweather Post.”—Chanel Cleeton, New York Times bestselling author of The Most Beautiful Girl in Cuba

“With remarkable expertise, Allison Pataki has given literary voice to this legendary and remarkable historical figure. Here is an intriguing plunge into the very soul of a woman who walked both the hard and the beautiful roads of life and deserves to be remembered. The Magnificent Lives of Marjorie Post is transportive fiction at its best!”—Susan Meissner, bestselling author of The Nature of Fragile Things

“Allison Pataki has written a fascinating novel about one of Washington’s most formidable female figures.”—Nancy Rubin Stuart, author of American Empress: The Life and Times of Marjorie Merriweather Post

“Chock full of stranger-than-fiction moments . . . Pataki’s story doesn’t skimp on Post’s dazzling adventures—there’s big money, big houses, and big jewelry at almost every turn—but it takes pains to present a private side of Post and establish her as more than just an heiress. . . . Post’s not just any historical titan. She was larger-than-life in her own time.”—Town & Country