The Life of the Mind: A Novel (Paperback) 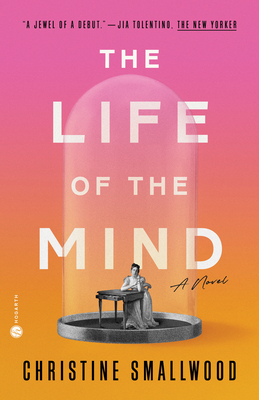 ONE OF THE BEST BOOKS OF THE YEAR: Time, NPR, The Atlantic, Electric Lit, Thrillist, LitHub, Kirkus Reviews • A witty, intelligent novel of an American woman on the edge, by a brilliant new voice in fiction—“the glorious love child of Ottessa Moshfegh and Sally Rooney” (Publishers Weekly, starred review)

“[A] jewel of a debut . . . abundantly satisfying.”—Jia Tolentino, The New Yorker

As an adjunct professor of English in New York City with little hope of finding a permanent position, Dorothy feels “like a janitor in the temple who continued to sweep because she had nowhere else to be but who had lost her belief in the essential sanctity of the enterprise.” No one but her boyfriend knows that she’s just had a miscarriage—not her mother, her best friend, or her therapists (Dorothy has two of them). She wasn’t even sure she wanted to be a mother. So why does Dorothy feel like a failure?

The Life of the Mind is a book about endings—of youth, of ambition, of possibility, but also of the meaning that an inquiring mind can find in the mess of daily experience. Mordant and remorselessly wise, this jewel of a debut cuts incisively into life as we live it, and how we think of it.

Christine Smallwood’s fiction has appeared in The Paris Review, n+1, and Vice. Her reviews, essays, and cultural reporting have been published in many magazines, including The New Yorker, Bookforum, T: The New York Times Style Magazine, and The New York Times Magazine, where she is a contributing writer. She has also written the “New Books” column for Harper’s Magazine, where she is a contributing editor, and been an editor at The Nation. She has a PhD in English from Columbia University, is a founding faculty member of the Brooklyn Institute for Social Research, and is a fellow at the New York Institute for the Humanities.

“One of the wittiest, most deliciously farcical novels I’ve read in a long time.”—Maureen Corrigan, NPR, Fresh Air

“Smallwood is . . . a delightfully stylish rambler; a conjurer of a heightened, carefully choreographed version of consciousness. Reading her is like watching an accomplished figure skater doing a freestyle routine.”—John Williams, The New York Times

“This book made me laugh out loud.”—The New York Review of Books

“Brilliant and pleasurable, funny and dark, cerebral and visceral—a must-read for the bleeding human survivors of the modern age.”—Melissa Broder, author of The Pisces and Milk Fed

“Smallwood’s achievement is to describe, with humor and precision, the affective conditions—what Dorothy’s students might call the ‘vibe’—of a generation living at the end of the end of history but with very little sense of the future.”—Maggie Doherty, The Nation

“Wholly original, ultra-precise and very funny... the perfect book for anyone who—consciously or not—narrativizes their life, and sometimes gets filled with an overwhelming sense
of dread that they’ve lost the plot.”—Refinery29

“An intellectual page-turner that commands one’s attention completely from the first sentence to the final line. . . urgent, essential reading for our troubling times.”—Andrew Martin, author of Early Work and Cool for America