Go Up for Glory (Paperback) 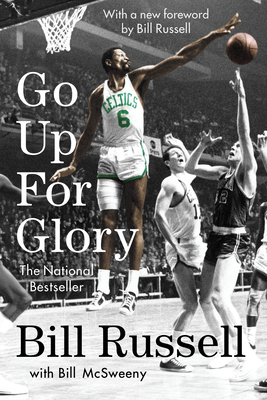 Back in print for the first time in decades, Go Up for Glory is the classic 1968 basketball memoir by NBA legend Bill Russell, with a new foreword from the author.

From NBA legend Bill Russell, Go Up for Glory is a basketball memoir that transcends time. First published in 1965, this narrative traces Russell's childhood in segregated America and details the challenges he faced as a Black man, even when he was a celebrated NBA star. And while some progress has been made, this book serves as an urgent reminder of how far we still have to go in the fight for human rights and equality.

Bill Russell was a former Boston Celtics center who played from 1956 to 1969, on eleven championship teams. A member of the Basketball Hall of Fame, he was a five-time NBA MVP and an All Star in twelve of the thirteen years he played; many regard him as one of the greatest basketball players of all time. Russell was the Celtics’ player-coach for three years, becoming the first Black coach in professional North American sports, and the first to win a championship. In 2011, President Barack Obama awarded Russell the Presidential Medal of Freedom for his accomplishments on the court and in the Civil Rights Movement. Russell is one of seven players in history to win an NCAA Championship, an NBA Championship, and an Olympic gold medal.

Bill McSweeny is a journalist, Korean War combat infantryman, corporate executive, and lifelong humanitarian and activist for civil and human rights. He is the author of three books, including Go Up for Glory, which he wrote with Celtics star Bill Russell in 1965.

Praise for Go Up for Glory:
"A half-century after its first publication, Glory remains one of the best books of its ilk, an enthralling snapshot of its era that serves as a reminder of not only how much basketball has changed, but also how much the rest of the world hasn't. Russell was unflinching in his description of the racism he encountered growing up in Louisiana and Oakland...Still, [he] found a measure of hope."—Sports Illustrated