Spin the Dawn (The Blood of Stars #1) (Paperback) 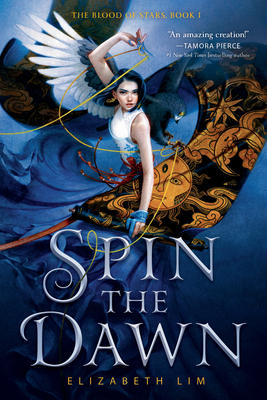 This is book number 1 in the The Blood of Stars series.

A truly beautiful and well constructed novel, Spin the Dawn is an instant favorite. As a former composer, Elizabeth Lim’s words are undeniably lyrical and magical. Maia takes her father’s place in the competition for Imperial Tailor, hiding both her gender and her magical scissors. The stakes are raised when Maia must journey across the country for the three magical supplies to sew three dresses of the goddess. Maia must face bandits, demons, and her past to find the enchanted items and break the oath of her newly found true love. This character-driven fantasy will capture you on page one and keep you guessing until the very end.

Project Runway meets Mulan in this sweeping fantasy about a teenage girl who poses as a boy to compete for the role of imperial tailor and embarks on an impossible journey to sew three magic dresses, from the sun, the moon, and the stars. And don’t miss Elizabeth Lim’s new novel, the instant New York Times bestseller, Six Crimson Cranes!

“All the cutthroat competition of a runway fashion reality show and the thrilling exploits of an epic quest." —The Washington Post

Maia Tamarin dreams of becoming the greatest tailor in the land, but as a girl, the best she can hope for is to marry well. When a royal messenger summons her ailing father, once a tailor of renown, to court, Maia makes the ultimate sacrifice and poses as a boy to take his place. She knows her life is forfeit if her secret is discovered, but she'll take that risk to achieve her dream and save her family from ruin. There's just one catch: Maia is one of twelve tailors in a cutthroat competition for the job.

Backstabbing and lies run rampant as the tailors compete in challenges to prove their artistry and skill. Maia's task is further complicated when she draws the attention of the court magician, Edan, whose piercing eyes seem to see straight through her disguise.

And nothing could have prepared her for the unthinkable final challenge: to sew three magic gowns for the emperor's reluctant bride-to-be, from the sun, the moon, and the stars. With this impossible task before her, she embarks on a journey to the far reaches of the kingdom, seeking the sun, the moon, and the stars, and finding more than she ever could have imagined.

Steeped in Chinese culture, sizzling with forbidden romance, and shimmering with magic, this fantasy novel is not to be missed.

"This is a white-knuckle read." —Tamora Pierce, #1 New York Times Bestselling author of Tempests and Slaughter

ELIZABETH LIM grew up in the San Francisco Bay Area, where she was raised on a hearty diet of fairy tales, myths, and songs. Before becoming an author, Elizabeth was a professional film and video game composer, and she still tends to come up with her best book ideas when writing near a piano. An alumna of Harvard College and the Juilliard School, she now lives in New York City with her husband and her daughters.

Elizabeth is the New York Times bestselling author of Spin the Dawn, Unravel the Dusk, and Six Crimson Cranes. She is also a contributor to Disney's A Twisted Tale series.

"Maia's perspective as a working tailor makes her world vibrant and full of sensory details that are sure to delight even the most jaded of fantasy readers." —NPR

"Beautifully written with a can’t-wait-for-the-sequel ending, this breathtaking and fast-paced Silk-road inspired fantasy from the author of Mulan-retelling Reflection (2018) is sure to enchant readers beginning to end." —Booklist

"A thrilling tale as rich as velvet and as exquisite as fine embroidery." —Heidi Heilig, author of The Girl from Everywhere