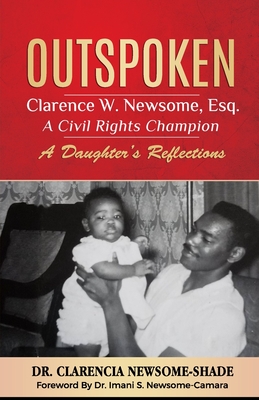 By Clarencia Newsome Shade
$18.99
Not On Our Shelves - Available to Order

"My father was a rebel and a bright young lawyer. Nearly sixty years later, discovering his legacy has helped me find my missing 'peace.'"

Outspoken introduces the world to Clarence W. Newsome, Esq., a Civil Rights Champion, working amongst a distinguished group of Black Lawyers of the law firm Hill, Tucker, Olphin, and Marsh, in Richmond, Virginia. The story chronicles the short, yet poignant, historical, legal career of attorney Newsome, as told by his youngest daughter Clarencia after many years of research. Clarence Newsome died when Clarencia was six years old. Years of combing through hundreds of articles and other personal documents lying dormant in a "blue suitcase" given to her at 16-years old by her mother helped Clarencia connect with her father. Clarencia has penned a heartfelt, eye-opening full-circle journey of her father's impact on American history.

Clarence Newsome was the lead attorney in the noteworthy Richmond 34 case, and the interstate travel case of Boynton, a Freedom Rider. As a role-player of the NAACP Legal Defense team, he won several personal injury lawsuits and settled high-profile cases working alongside his Howard University School of Law brothers and friends, Oliver Hill, Thurgood Marshall, Spottswood Robinson, Martin A. Martin, and L. Douglas Wilder. Newsome died during the height of his career due to hypertension and kidney failure. His nature and tireless efforts at dismantling injustices against Blacks, including the Jim Crow laws of the South. Clarencia Newsome-Shade has paved the way for her father's legacy to live on for generations to come.