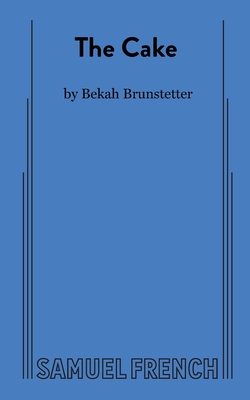 By Bekah Brunstetter
$10.95
Backordered - May Take 10+ Days to Become Available, Will Ship Separately

Della makes cakes, not judgment calls - those she leaves to her husband, Tim. But when the girl she helped raise comes back home to North Carolina to get married, and the fianc is actually a fianc e, Della's life gets turned upside down. She can't really make a cake for such a wedding, can she? For the first time in her life, Della has to think for herself.

Bekah hails from Winston-Salem, North Carolina, and currently lives in Los Angeles. Plays include The Cake (Ojai Playwrights Conference), Going to a Place where you already are (South Coast Repertory), The Oregon Trail (Portland Center Stage Fall 2016, O’Neill Playwrights Conference; Flying V) Cutie and Bear ( Roundabout commission) A Long and Happy life (Naked Angels Commission), Be A Good Little Widow (Ars Nova, Collaboraction, The Old Globe), Oohrah! (The Atlantic Theater, Steppenwolf Garage, the Finborough Theater / London), Nothing is the end of the World (except for the end of the world) (Waterwell productions), House of Home (Williamstown Theater festival) and Miss Lilly Gets Boned (Ice Factory Festival.) She is an alumni of the CTG Writers Group, Primary Stages writes group, Ars Nova Play Group, The Playwright’s Realm, and the Women’s Project Lab. She is currently a member of the Echo Theater’s Playwright’s group. She has previously written for MTV (Underemployed; I Just want my Pants Back) ABC Family’s Switched at Birth, Starz’s upcoming series American Gods. She is currently a Co-Producer on NBC’s upcoming show, This is Us. BA UNC Chapel Hill; MFA in Dramatic Writing from the New School for Drama.

"The play's tight narrative construction is apparent from the opening scene, which immediately seduces us with Della's bubbly charm...What's refreshing and heartening about THE CAKE is its characters' willingness to face their differences and limitations head on...This is us as we could be, if we'd all just try a little harder." — The Los Angeles Times

“RECOMMENDED… STAGE RAW TOP 10… a singularly savory dramedy that crystallizes a contentious issue and, with empathy for both sides, portrays it in an edifying and insightful way… I left the theater feeling moved and enlightened.” — Stage Raw