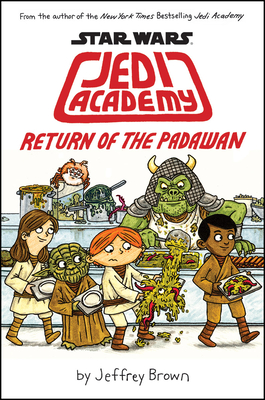 By Jeffrey Brown
$12.99
In Stock at Publisher - Available to Ship to Your Home

This is book number 2 in the Star Wars: Jedi Academy series.

After surviving his first year at Jedi Academy, Roan Novachez thought his second year would be a breeze. He couldn't have been more wrong. Roan feels like he's drifting apart from his friends, and it's only made worse when Roan discovers he's not the amazing pilot he thought he'd be. When the school bullies take him under their wing, he decides they aren't so bad after all--or are they?

This year, Roan will have to face alien poetry tests, menacing robots, food fights, flight simulation class, online bullies, more lightsaber duels, and worst of all . . . a girl who is mad at him.

This incredible, original story captures all of the humor, awkwardness, fun, and frustrations of middle school--all told through one boy's comics, journal entries, letters, sketches, e-mails, and more.

Jeffrey Brown is an Eisner Award winner and NY Times Bestselling author/illustrator of Darth Vader and Son and Vader’s Little Princess, both imagining what it would have been like if Darth Vader had raised a young Luke and Leia.
Jeffrey has created dozens of graphic memoirs, humorous parodies, and cat books. He is also a lifelong Star Wars fan, but despite his best efforts, has been unable to use the Force. He lives in Chicago with his wife, Jennifer, and his two sons.

Jeffrey Brown won an Eisner Award for Darth Vader and Son in 2013.

Also, the 1st Jedi Academy is a NY Times Bestseller.

“Even the most critical Star Wars fans will give Lucasfilm points for licensing this subversive graphic novel.” -- Kirkus Reviews

"Brown doesn't just regurgitate Star Wars details – he gives a sense of what the universe would be like for a kid. This fresh perspective results in humor that often hits its mark. With humor and subtle heart, Jedi Academy is destined to fly off shelves everywhere. Be sure to pick up multiples.” -100ScopeNotes.com (SLJ Blog)

“Everyone reading this who reads with young children has just found their next purchase.” -BleedingCool.com

“So much fun! As a casual enthusiast of Star Wars, I was fully engaged by this story of Roan, a young boy from Tatooine (sound familiar?)” - Teen Librarian Toolbox (blog)

“Brown has taken his skill for making the day-to-day of a science fiction universe entertaining, and has expanded it on a wider scale. Old and new fans of George Lucas' creation will find something fun in Star Wars: Jedi Academy.” -The-Trades.com