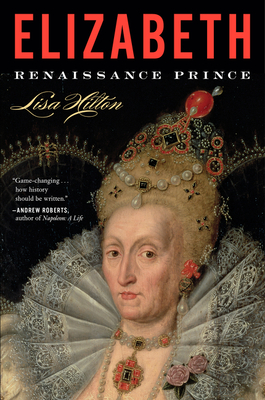 “Game-changing . . . How history should be written.” — Andrew Roberts, author of Napoleon: A Life

[An] ambitious re-examination of the intersection of gender and monarchy.” — New York Times Book Review

Queen Elizabeth I was all too happy to play on courtly conventions of gender when it suited her “weak and feeble woman’s body” to do so for political gain. But in Elizabeth, historian Lisa Hilton offers ample evidence why those famous words should not be taken at face value. With new research out of France, Italy, Russia, and Turkey, Hilton’s fresh interpretation is of a queen who saw herself primarily as a Renaissance prince—an expert in Machiavellian statecraft.

Elizabeth depicts a queen who was much less constrained by her femininity than most accounts claim, challenging readers to reassess Elizabeth’s reign and the colorful drama and intrigue to which it is always linked. It’s a fascinating journey that shows how a marginalized newly crowned queen, whose European contemporaries considered her to be the illegitimate ruler of a pariah nation, ultimately adapted to become England’s first recognizably modern head of state.

“Hilton transforms an irreverent, centuries-old vision of a ‘bewigged farthingale with a mysterious sex life’ into a resolute, steel-spined survivor who far surpassed Henry VII’s wildest hopes for his new dynasty.” — Publishers Weekly

LISA HILTON is the acclaimed author of The Real Queen of France: Athénais and Louis XIV, Mistress Peachum's Pleasure, Queens Consort: England's Medieval Queens, and The Horror of Love. She is the author of three novels, the best-selling Wolves in Winter; The House with Blue Shutters, which was short-listed in the UK for the Commonwealth Writers' Prize, and The Stolen Queen. She was educated at Oxford University and lives in central London.