Places and Names: On War, Revolution, and Returning (Paperback) 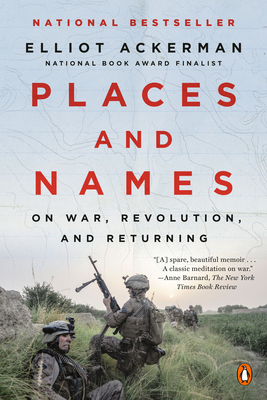 From a decorated Marine war veteran and National Book Award finalist, an astonishing reckoning with the nature of combat and the human cost of the wars in Iraq, Afghanistan, and Syria.

Toward the beginning of Places and Names, Elliot Ackerman sits in a refugee camp in southern Turkey, across the table from a man named Abu Hassar, who fought for al-Qaeda in Iraq and whose connections to the Islamic State are murky. At first, Ackerman pretends to have been a journalist during the Iraq War, but after establishing a rapport with Abu Hassar, he takes a risk by revealing to him that in fact he was a Marine special operation officer. Ackerman then draws the shape of the Euphrates River on a large piece of paper, and his one-time adversary quickly joins him in the game of filling in the map with the names and dates of places where they saw fighting during the war. They had shadowed each other for some time, it turned out, a realization that brought them to a strange kind of intimacy.

The rest of Elliot Ackerman's extraordinary memoir is in a way an answer to the question of why he came to that refugee camp, and what he hoped to find there. By moving back and forth between his recent experiences on the ground as a journalist in Syria and its environs and his deeper past in Iraq and Afghanistan, he creates a work of remarkable atmospheric pressurization. Ackerman shares vivid and powerful stories of his own experiences in combat, culminating in the events of the Second Battle of Fallujah, the most intense urban combat for the Marines since Hue in Vietnam, where Ackerman's actions leading a rifle platoon saw him awarded the Silver Star. He weaves these stories into the latticework of a masterful larger reckoning with contemporary geopolitics through his vantage as a journalist in Istanbul and with the human extremes of both bravery and horror.

At once an intensely personal story about the terrible lure of combat and a brilliant meditation on the larger meaning of the past two decades of strife for America, the region, and the world, Places and Names bids fair to take its place among our greatest books about modern war.

Elliot Ackerman is the author of several novels including Dark at the Crossing, which was a finalist for the National Book Award, and most recently Waiting for Eden. His writings appear in Esquire, The New Yorker, The Atlantic, and The New York Times Magazine, among other publications, and his stories have been included in The Best American Short Stories and The Best American Travel Writing. He is both a former White House Fellow and Marine, and served five tours of duty in Iraq and Afghanistan, where he received the Silver Star, the Bronze Star for Valor, and the Purple Heart. He divides his time between New York City and Washington, D.C.

“In Places and Names, perhaps the most striking war memoir of the year, Ackerman attempts to make sense of the reasons he served (personal and geopolitical), the people he met, the kinship he felt and the reckonings he has since confronted. Places and Names is as clean and spare in its prose as it is sharp and unsparing in timely observation.” —TIME magazine

“[A] spare, beautiful memoir . . . Places and Names is a classic meditation on war, how it compels and resists our efforts to order it with meaning. In simple, evocative sentences, with sparing but effective glances at poetry and art, [Ackerman] weaves memories of his deployments with his observations in and near Syria. He pulls off a literary account of war that is accessible to those who wonder ‘what it’s like’ while ringing true to those who—each in his or her own way—already know.” —The New York Times

“Beautiful writing about combat and humanity and what it means to ‘win’ a war.” —Mary Louise Kelly, NPR

“Lyrical . . . Places and Names ends with a searing and beautiful chapter that details [Ackerman’s] thoughts amid the blood, sweat and adrenaline of the Battle of Fallujah. . . . A thoughtful perspective on America’s role overseas.” —Washington Post

“What a great, honest book—the kind that makes one feel lucky to have in one's hands. Ackerman has served his country twice: first as an infantryman in our nations wars, and then as a guide—wise beyond his years—who helps us understand what we've done. His prose is easy and comfortable like an old jacket. His understanding of war is so profound that one feels like secrets have been revealed—truths—information that one day may be necessary for our survival. Well done.” —Sebastian Junger, author of Tribe

“Places and Names is its own profile in courage: the story of how a Marine turned reporter struggled with the polemics of desolation in the Middle East. Elliot Ackerman is a man of both action and thought, and his book is closely observed, rigorously lived, and clarifying for all of us who have not understood how U.S. policy in the Islamic world went so terribly wrong.” —Andrew Solomon, author of Far and Away, Far From the Tree, and The Noonday Demon

"[Ackerman's] descriptions of Syria, which he visited as a writer, were so painfully evocative for me that I had to stop reading for a time. His vivid, sparse prose bears comparison to that of Tim O’Brien in The Things They Carried or Norman Lewis in Naples ’44; Places and Names has the same clear-eyed view of what war is.” —The Spectator's Books of the Year 2019

“It’s so readable I devoured the book in one plane journey . . . a master of dagger-sharp prose and memorable detail.” —Times (UK)

“Brings a fiction writer’s touch to his reportage . . . His descriptions of battle itself are all the more effective for their matter-of-factness . . . A gifted and thoughtful witness.” —Sunday Telegraph

“[Places and Names] contains many insights into the purpose of war and how it damages all parties involved. . . . Any fan of Ackerman’s previous novels, memoirs on the Iraq or Afghanistan wars, and valuable outlooks on the nature of war and its combatants will find this phenomenal.” —Library Journal (starred review)

“The power of this memoir comes from [Ackerman’s] illumination of paradoxes and contradictions that provide a common emotional denominator for soldiers who previously found themselves in wars where they discovered more than two sides. . . . A profoundly human narrative that transcends nationality and ideology.” —Kirkus (starred review)

“[A] searing, contemplative, and unforgettable memoir-in-essays. . . . Deeply personal yet never losing sight of the big, historical reasons for recent events, this collection recalls Michael Herr’s classic Dispatches as well as William T. Vollmann’s voluminous ruminations on violence in Rising Up and Rising Down, and is perhaps the finest writing about the Afghanistan and Iraq conflicts that has been published to date.” —Booklist (starred review)

“Elliot Ackerman fought the Long War, and now, with Places and Names, he gives us a searingly honest record of his ongoing effort to make sense of that war.  This is, literally, a book of wanderings; Ackerman's sojourns to conflict zones, old battlefields, and muddy refugee camps recall the wanderings of that earlier soldier, Odysseus, as he struggles to come home from war, and, no less than his predecessor, Ackerman finds himself journeying through the shadow world of ghosts and spirits that go by the name of memory. Vivid, profound, restless, and relentlessly probing, Places and Names is destined to become a classic of the Long War.” —Ben Fountain, author of Billy Lynn’s Long Halftime Walk

"Places and Names is a brilliant and gripping account of the aftermath of failed wars and revolutions, and of the still burning idealism that smolders in the wreckage. Elliot Ackerman brings a novelist's skill with language, a reporter's eye for detail, and his life experience as a highly decorated Marine veteran of five deployments to bear in this unique and powerful meditation on violence, heroism, and the fracturing of the Middle East.” —Phil Klay, author of Missionaries and Redeployment, winner of the National Book Award

“Elliot Ackerman’s voice scares me. It's a bit too close for comfort. He sees too much and he knows too much, and that makes him a great guide to today’s post-everything Middle East. Read him at your own risk—but ignore this book at your own peril.” —Thomas E. Ricks, author of Making the Corps, Fiasco, and Churchill and Orwell

“In Places and Names, Elliot Ackerman, a soldier turned writer, seeks out his former foes and confronts his own memories on battlefields where the killing continues. The result is one of the most profound books I have ever read about the real nature of war and the abstract allure of the ideas and the bloodshed that fuels it.” —Jon Lee Anderson, author of The Fall of Baghdad and Guerrillas: Journeys in the Insurgent World

“Elliot Ackerman writes beautifully about war—especially the new wars of the Middle East through fiction and now non-fiction. His exceptional memoir is really a double memoir of his own experiences as a Marine and those of a jihadist fighter he befriends in a refugee camp. The result is an superb, unique, and unforgettable story of war and death, fear and cruelty, above all the horrors and allure of combat.” —Simon Sebag Montefiore, author of The Romanovs

“Places and Names is an extraordinarily beautiful and insightful work of memoir and journalism by a writer who deserves to be read widely. Elliot Ackerman is as adept at describing the strange cocktail of emotions that accompany the moments preceding combat as he is unraveling the Gordian Knot of contemporary geopolitics.” —Kevin Powers

“Ackerman’s honest searching to come to terms with his war experience helped me better understand my own. This book is a gift that should be shared with every American who helped pay for people like Ackerman to fight their wars for them.” —Karl Marlantes, prize-winning author of Matterhorn and Deep River