Burn the Ice: The American Culinary Revolution and Its End (Hardcover) 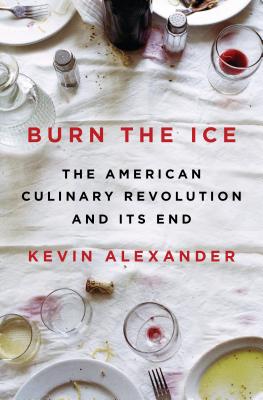 By Kevin Alexander
$28.00
Email or call for availability

Over the past decade, Kevin Alexander saw American dining turned on its head. Starting in 2006, the food world underwent a transformation as the established gatekeepers of American culinary creativity in New York City and the Bay Area were forced to contend with Portland, Oregon. Its new, no-holds-barred, casual fine-dining style became a template for other cities, and a culinary revolution swept across America. Traditional ramen shops opened in Oklahoma City. Craft cocktail speakeasies appeared in Boise. Poke bowls sprung up in Omaha. Entire neighborhoods, like Williamsburg in Brooklyn, and cities like Austin, were suddenly unrecognizable to long-term residents, their names becoming shorthand for the so-called hipster movement. At the same time, new media companies such as Eater and Serious Eats launched to chronicle and cater to this developing scene, transforming nascent star chefs into proper celebrities. Emerging culinary television hosts like Anthony Bourdain inspired a generation to use food as the lens for different cultures. It seemed, for a moment, like a glorious belle epoque of eating and drinking in America. And then it was over.

To tell this story, Alexander journeys through the travails and triumphs of a number of key chefs, bartenders, and activists, as well as restaurants and neighborhoods whose fortunes were made during this veritable gold rush--including Gabriel Rucker, an originator of the 2006 Portland restaurant scene; Tom Colicchio of Gramercy Tavern and Top Chef fame; as well as hugely influential figures, such as André Prince Jeffries of Prince's Hot Chicken Shack in Nashville; and Carolina barbecue pitmaster Rodney Scott.

He writes with rare energy, telling a distinctly American story, at once timeless and cutting-edge, about unbridled creativity and ravenous ambition. To "burn the ice" means to melt down whatever remains in a kitchen's ice machine at the end of the night. Or, at the bar, to melt the ice if someone has broken a glass in the well. It is both an end and a beginning. It is the firsthand story of a revolution in how Americans eat and drink.

Kevin Alexander is a James Beard Award-winning food journalist and recipient of the Society of Professional Journalist's Mark of Excellence Award. His work has appeared in Esquire, Elle, Men's Journal, The New Republic, and Boston Globe, and he is a 2018 Association of Food Journalists award winner. He was born in Texas, grew up in New England, and now lives in Northern California.

“An anecdotal, episodic, wide-ranging accounting of the strange, slow deceleration of the restaurant mania of the aughts, and the human costs of the decline.” —Helen Rosner

“Sharply insightful . . . From new urbanism and gentrification to identity politics, venture capital, and the difficulty of ‘eating local’ when the local is subject to abrupt climate change, Alexander gets at how the buzzy restaurant scene of the past twenty years has depended on trends much bigger than its own.” —The Times Literary Supplement

“Mr. Alexander is an admirably thorough researcher. He conducted hundreds of hours of interviews for the book, meeting with some of his subjects dozens of times and revisiting most at least once to chart the arc of their careers. This groundwork allows him to bring us deeply into their worlds, probing their motivations, backgrounds, flaws and virtues, writing with authority not just about public perceptions but also about private moments . . . [T]he book provides an entertaining and informative picture of the American restaurant scene over the past dozen years. Just dipping in and out of it pretty much guarantees learning something new.” —Wall Street Journal

“Kevin Alexander makes a fascinating case that we’ve witnessed the most exciting and creative time for food in recent history, but now, the golden age has passed. It’s a bold idea, and one that’ll get you thinking hard about what’s next.” —Plate

“[A] well-researched, witty food industry history…Alexander’s sharp wit keeps the narrative moving…This astute reflection on an era of American food culture will give foodies a new perspective on the restaurants they love and the dining experiences they’ve grown to expect.” —Publishers Weekly

“Kevin Alexander is such a fluent and engaging writer that I was several chapters in before I realized how gimlet-eyed his view of the American culinary world is (and by "gimlet" here I mean the thing that pokes holes in other things, not the one that's a mix of gin and Rose's lime juice). We need this book.” – David Wondrich, author of Imbibe!: From Absinthe Cocktail to Whiskey Smash, a Salute in Stories and Drinks to "Professor" Jerry Thomas, Pioneer of the American Bar

“This is a big American story, essential and gripping. Kevin Alexander shows how our culture fought and lost a battle against a creeping suburbia. Burn the Ice is modern anthropology about the physical and spiritual implications of what and how we eat. I loved it.” – Wright Thompson, author of The Cost of These Dreams: Sports Stories and Other Serious Business

“In his direct and spirited way, Kevin Alexander builds a swirling, deeply reported narrative about the American culinary scene. He digs into so many stories, shaping a detailed picture of how and what we've been fed in restaurants for the past 12 years. For anyone who follows chef and restaurant culture—and anyone who likes to eat out—Burn the Ice is a juicy, satisfying read.” – Erin Byers Murray, author Grits: A Cultural and Culinary Journey Through the South and Shucked: Life on a New England Oyster Farm

“If you’ve noticed that food has become especially central to the American consciousness today, you’re not alone. Kevin Alexander takes a fresh and original look at the whirlwind of circumstances—cultural, legislative, and economic—that have laid the groundwork for food’s precarious ascendance. Burn the Ice is captivating, concerning, and—most of all—inspiring.” —Danny Meyer, CEO, Union Square Hospitality Group; Founder, Shake Shack; and author, Setting the Table

“All revolutions end—and let’s face it, they’re kind of exhausting. Progress in the restaurant craft has now relaxed into evolution, which of course every industry needs to prosper. With instructive, hilarious, and sometimes harrowing stories from the greatest minds in America’s culinary trenches, Burn The Ice offers an authoritative preview of what’s next.” —Ted Allen, host of Food Network’s “Chopped”