The Gambler Wife: A True Story of Love, Risk, and the Woman Who Saved Dostoyevsky (Hardcover) 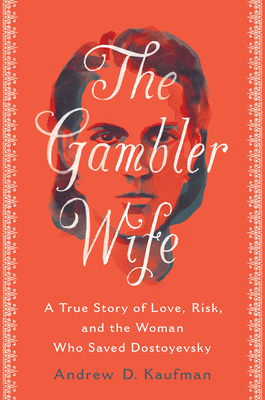 “Feminism, history, literature, politics—this tale has all of that, and a heroine worthy of her own turn in the spotlight.” —Therese Anne Fowler, bestselling author of Z: A Novel of Zelda Fitzgerald

In the fall of 1866, a twenty-year-old stenographer named Anna Snitkina applied for a position with a writer she idolized: Fyodor Dostoyevsky. A self-described “emancipated girl of the sixties,” Snitkina had come of age during Russia’s first feminist movement, and Dostoyevsky—a notorious radical turned acclaimed novelist—had impressed the young woman with his enlightened and visionary fiction. Yet in person she found the writer “terribly unhappy, broken, tormented,” weakened by epilepsy, and yoked to a ruinous gambling addiction. Alarmed by his condition, Anna became his trusted first reader and confidante, then his wife, and finally his business manager—launching one of literature’s most turbulent and fascinating marriages.

The Gambler Wife offers a fresh and captivating portrait of Anna Dostoyevskaya, who reversed the novelist’s freefall and cleared the way for two of the most notable careers in Russian letters—her husband’s and her own. Drawing on diaries, letters, and other little-known archival sources, Andrew Kaufman reveals how Anna warded off creditors, family members, and her greatest romantic rival, keeping the young family afloat through years of penury and exile. In a series of dramatic set pieces, we watch as she navigates the writer’s self-destructive binges in the casinos of Europe—even hazarding an audacious turn at roulette herself—until his addiction is conquered. And, finally, we watch as Anna frees her husband from predatory contracts by founding her own publishing house, making Anna the first solo female publisher in Russian history.

The result is a story that challenges ideas of empowerment, sacrifice, and female agency in nineteenth-century Russia—and a welcome new appraisal of an indomitable woman whose legacy has been nearly lost to literary history.

Andrew D. Kaufman is an associate professor, General Faculty, lecturer in Slavic Languages and Literatures, and assistant director of the Center for Teaching Excellence at the University of Virginia. A PhD in Slavic languages and literatures from Stanford University, Kaufman is the author of Give War and Peace a Chance: Tolstoyan Wisdom for Troubled Times and Understanding Tolstoy, and a coauthor of Russian for Dummies. His work has been featured on Today, NPR, and PBS, and in The Washington Post, and he has served as a Russian literature expert for Oprah’s Book Club. Kaufman is the creator of Books Behind Bars, introducing incarcerated youth to the writings of Dostoyevsky and other authors.

Advance praise for The Gambler Wife:

“Recounts Anna’s agony in scenes as gut-wrenching as any we might encounter in her husband’s novels.” —New York Times Book Review

“The Gambler Wife is not only a much-needed act of justice; it is also profoundly entertaining, sometimes funny, and sometimes intolerably sad.” —A. N. Wilson, The Times Literary Supplement

“Deeply researched [and] informative . . . A fresh look at a spirited woman who played a significant role in literary history.” —Kirkus Reviews

“The story of an intriguing, impressive woman who has too long been treated as a footnote in her husband’s story. . . . Feminism, history, literature, politics—this tale has all of that, and a heroine worthy of her own turn in the spotlight.” —Therese Anne Fowler, bestselling author of Z: A Novel of Zelda Fitzgerald

“With enlightening research and engaging prose, The Gambler Wife recounts the improbable and profoundly influential relationship that lay at the heart of Fyodor Dostoevsky’s literary enterprise: his marriage to Anna Snitkina. Hers is an inspiring, unexpectedly modern story of partnership, ambition, and achievement, and Andrew Kaufman tells it brilliantly.”
—Caroline Weber, author of Proust’s Duchess

“Dostoevsky called her 'the little diamond,' and Anna Snitkina was just that—at once brilliant and entrancing, yet rock-hard and indestructible. Andrew D. Kaufman’s captivating book restores Anna to her rightful place and opens a window onto a dizzyingly complex relationship that helped to give us some of the world’s greatest novels.”
—Douglas Smith, author of The Russian Job and Rasputin

“With access to recently discovered sources, rich historical context, and deep psychological insight, Andrew Kaufman reveals Anna Dostoyevskaya as not only Fyodor Dostoyevsky’s wife but also his editor and inspiration, critic and enabler—an innovative publisher, pioneering feminist, and every bit as much a gambler as her husband. And The Gambler Wife, while rigorously grounded in the sources, itself reads like a Dostoevsky novel.”
—William Mills Todd III, Professor of Literature Emeritus, Harvard University

“A riveting tale—a true literary love story that defies and compels the imagination at once . . . A fine and formidable book.”
—Jay Parini, author of The Last Station and Borges and Me