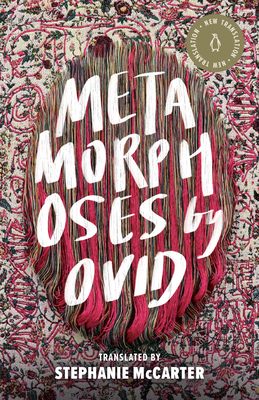 By Ovid, Stephanie McCarter (Translated by)
$38.00

Of all the classics you haven't read, there is a particular "eat your vegetables" quality Ovid seems to have acquired. Ovid's material is the whole of Roman history from the beginnings of time through every major character in classical mythology, up to his present day and the then current emperor Augustus (who exiled the poet anyway). The 'metamorphoses' of the title refer the author's ingenious transformation of each story into the next, even as within tale, many characters 'evolve' into trees, spiders, or mountains. The overall effect is one of completeness and order in the universe, comprised solely of moments of violence and chaos. It is also sexually explicit, and more advanced in its treatment of non-binary gender, sexual fluidity, and polyamory than we have yet considered. He also basically invents "meta-fiction," do I need to go on? Buy this thing - you'll laugh, get turned on, and finally I'll have someone to talk about it with. Jeez.

The first female translator of the epic into English in over sixty years, Stephanie McCarter addresses accuracy in translation and its representation of women, gendered dynamics of power, and sexual violence in Ovid’s classic.

Ovid’s Metamorphoses is an epic poem, but one that upturns almost every convention. There is no main hero, no central conflict, and no sustained objective. What it is about (power, defiance, art, love, abuse, grief, rape, war, beauty, and so on) is as changeable as the beings that inhabit its pages. The sustained thread is power and how it transforms us, both those of us who have it and those of us who do not. For those who are brutalized and traumatized, transformation is often the outward manifestation of their trauma. A beautiful virgin is caught in the gaze of someone more powerful who rapes or tries to rape them, and they ultimately are turned into a tree or a lake or a stone or a bird. The victim’s objectification is clear: They are first a visual object, then a sexual object, and finally simply an object. Around 50 of the epic’s tales involve rape or attempted rape of women. Past translations have obscured or mitigated Ovid’s language so that rape appears to be consensual sex. Through her translation, McCarter considers the responsibility of handling sexual and social dynamics.

Then why continue to read Ovid? McCarter proposes Ovid should be read because he gives us stories through which we can better explore ourselves and our world, and he illuminates problems that humans have been grappling with for millennia. Careful translation of rape and the body allows readers to see Ovid’s nuances clearly and to better appreciate how ideas about sexuality, beauty, and gender are constructed over time. This is especially important since so many of our own ideas about these phenomena are themselves undergoing rapid metamorphosis, and Ovid can help us see and understand this progression. The Metamorphoses holds up a kaleidoscopic lens to the modern world, one that offers us the opportunity to reflect on contemporary discussions about gender, sexuality, race, violence, art, and identity.

Ovid (43 BC-AD 17) was born in central Italy. He was sent to Rome where he realised that his talent lay with poetry rather than with politics. His first published work was Amores, a collection of short love poems. He was expelled in A.D. 8 by Emperor Augustus for an unknown reason and went to Tomis on the Black Sea, where he died.

Stephanie McCarter is Professor of Classical Literature at the University of the South in Sewanee. She has published translated work on Horace and has written for Sewanee Review, Eidolon, Electric Literature and The Millions.

“McCarter confronts the tricky issues associated with both the poet and his epic not only in her forthright introduction but in the translation itself, where, like an art restorer removing decades of browned varnish from an Old Master, she strips away a number of inaccuracies and embellishments that have accreted in translations over the decades and centuries, obscuring the sense of certain passages, particularly those portraying women and sexual violence… McCarter’s translation reproduces Ovid’s speed and clarity. Even better, she is alert to many of the sparkling verbal effects for which the poet was famous in his own time… If you didn’t know she was writing about the concerns of someone who died twenty centuries ago, you’d think her subject was still alive.”
—Daniel Mendelsohn, The New Yorker

“The Metamorphoses has it all: sex, death, love, violence, gods, mortals, monsters, nymphs, all the great forces, human and natural. With this vital new translation, Stephanie McCarter has not only updated Ovid's epic of transformation for the modern ear and era --- she's done something far more powerful. She's paid rigorous attention to the language of the original and brought to us its ferocity, its sensuality, its beauty, its wit, showing us how we are changed, by time, by violence, by love, by stories, and especially by power. Here is Ovid, in McCarter's masterful hands, refreshed, renewed, and pulsing with life.”
—Nina MacLaughlin, author of Wake, Siren: Ovid Resung

“Stephanie McCarter’s gorgeous verse translation of the Metamorphoses is ground-breaking not just in its refreshingly accessible approach to Ovid’s syntax and formal devices but for how she reframes the controversial subjects that have made Ovid, and Ovidian scholarship, so fraught for contemporary readers. McCarter’s translation understands that the Metamorphoses is a complex study of power and desire, and the dehumanizing ways that power asserts itself through and on a variety of bodies. McCarter’s deft, musical, and forthright translation returns much needed nuance to Ovid’s tropes of violence and change, demonstrating to a new generation of readers how our identities are always in flux, while reminding us all of the Metamorphoses’ enduring relevance.”
—Paisley Rekdal, author of Nightingale