Savage Dreams: A Journey into the Hidden Wars of the American West (Paperback) 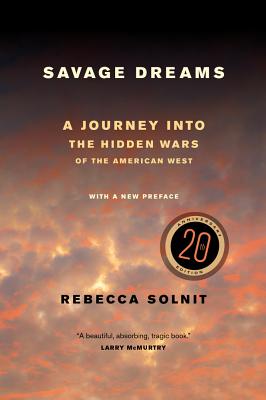 This book travels across the course of American landscape history, through Manifest Destiny to the foundation of the national park’s system and up to the nuclear crisis. This book felt so vital, to important to the present moment, has stayed with me ever since.

In 1851, a war began in what would become Yosemite National Park, a war against the indigenous inhabitants. A century later–in 1951–and a hundred and fifty miles away, another war began when the U.S. government started setting off nuclear bombs at the Nevada Test Site. It was called a nuclear testing program, but functioned as a war against the land and people of the Great Basin.

In this foundational book of landscape theory and environmental thinking, Rebecca Solnit explores our national Eden and Armageddon and offers a pathbreaking history of the west, focusing on the relationship between culture and its implementation as politics. In a new preface, she considers the continuities and changes of these invisible wars in the context of our current climate change crisis, and reveals how the long arm of these histories continue to inspire her writing and hope.

Rebecca Solnit is the author of many books, including Storming the Gates of Paradise, Infinite City: A San Francisco Atlas, and Unfathomable City: A New Orleans Atlas, all from UC Press.

"Solnit's intelligent meditations may awaken us from our self-congratulatory coma. [Her] mid is fertile, wide-ranging, and capable of integrating the bewildering deluge of fact, political delusion, flights of genius, inconceivable danger, and cunning deceit that have characterized the nuclear age."
— Los Angeles Times

"“The product of a stunningly original and expansive imagination. Savage Dreams ties together the histories of Yosemite National Park and the Nevada Test Site. . . . to illuminate the political stakes of how we think about, and act upon, the landscape.” "
— SF Weekly

"Flinging her net wide, Solnit evokes powerful images of destruction and conquest as she explores governmental abuses in the region."
— Publishers Weekly

"Solnit's ability to see these issues from several sides-to see the nuclear blasts as beautiful as well as terrible, James Savage as not just a butcher but as a complex man-make this a complicated, engaging work."
— Environmental History Review

"Solnit's book is an important contribution to the growing body of work on 20th-century activism. It is from such portrayals of the problems faced in past episodes of activism that we may broaden our own understanding of the risks––and promise––of our own collective actions."
— Science & Society