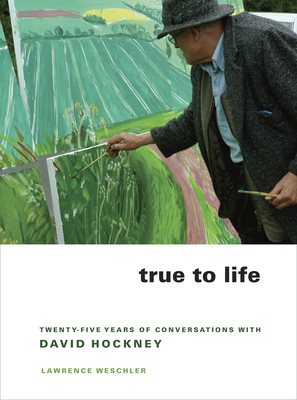 Soon after the book's publication in 1982, artist David Hockney read Lawrence Weschler's Seeing Is Forgetting the Name of the Thing One Sees: A Life of Contemporary Artist Robert Irwin and invited Weschler to his studio to discuss it, initiating a series of engrossing dialogues, gathered here for the first time. Weschler chronicles Hockney's protean production and speculations, including his scenic designs for opera, his homemade xerographic prints, his exploration of physics in relation to Chinese landscape painting, his investigations into optical devices, his taking up of watercolor—and then his spectacular return to oil painting, around 2005, with a series of landscapes of the East Yorkshire countryside of his youth. These conversations provide an astonishing record of what has been Hockney's grand endeavor, nothing less than an exploration of "the structure of seeing" itself.

"The artist’s process has never been better charted."
— Bookforum

Starred Review: “Hockney is a fascinating and surprising character, claiming that the stakes are no less than ‘the utter subversion of the tyrannical hegemony of traditional one-point perspective,’ but also grounded enough to declare, ‘if art isn’t playful, it’s nothing.’. . . Weschler rewards his readers with lengthy quotes, an overwhelming wealth of knowledge and a lively narrative style.”
— Publishers Weekly

“Aside from being a terrific writer, Weschler is clearly a great listener and interviewer.”
— San Diego Union-Tribune

“Taken together, Weschler's two books [True to Life, and Seeing is Forgetting the Name of the Thing One Sees on Robert Irwin, UC Press] amount to an engaging argument about visual culture and its possibilities. They shift the reader several levels above the peevish bickering that often deadens cultural discussion and remind us that contemporary art, on some of its best days, draws us into the midst of debates that are wonderfully creative and crucially important while nevertheless unresolvable—and also, like a Hockney drawing, deeply and seriously charming.”
— National Post

"Overall, the Hockney/Weschler conversations provide an astonishing record of Hockney's exploration of "the structure of seeing" itself and offer a window on his work. To Weschler's credit, he also includes a few critical responses to some of the projects. . . . His ability to present and comment upon the artistic process without bogging it down in superfluous critical commentary, allows his essays to help us think about what creativity is in the broadest sense."
— Leonardo