Curatorial Activism: Towards an Ethics of Curating (Hardcover) 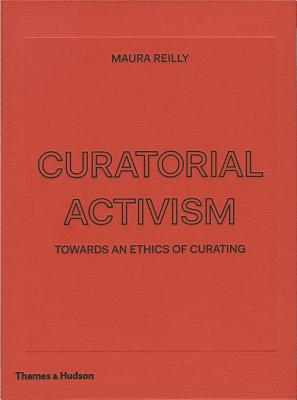 Current art world statistics demonstrate that the fight for gender and race equality in the art world is far from over: only sixteen percent of this year’s Venice Biennale artists were female; only fourteen percent of the work displayed at MoMA in 2016 was by nonwhite artists; only a third of artists represented by U.S. galleries are female, but over two-thirds of students enrolled in art and art-history programs are young women.

Arranged in thematic sections focusing on feminism, race, and sexuality, Curatorial Activism examines and illustrates pioneering examples of exhibitions that have broken down boundaries and demonstrated that new approaches are possible, from Linda Nochlin’s “Women Artists” at LACMA in the mid-1970s to Jean-Hubert Martin’s “Carambolages” in 2016 at the Grand Palais in Paris. Profiles key exhibitions by pioneering curators including Okwui Enwezor, Linda Nochlin, Jean-Hubert Martin and Nan Goldin, with a foreword by Lucy Lippard, internationally known art critic, activist and curator, and early champion of feminist art, this volume is both an invaluable source of practical information for those who understand that institutions must be a driving force in this area and a vital source of inspiration for today’s expanding new generation of curators.

Maura Reilly is a curator and arts writer, and executive director of the National Academy of Design in New York. As the founding curator of the Sackler Center for Feminist Art at the Brooklyn Museum, she launched the first exhibition and public programming space in the USA devoted entirely to feminist art, where she organized multiple exhibitions, including the permanent installation of Judy Chicago’s Dinner Party and the blockbuster Global Feminisms (co-curated with Linda Nochlin.) Reilly has authored and edited many books and articles on contemporary art, including most recently Women Artists: The Linda Nochlin Reader (Thames & Hudson, 2015). She is the recipient of several prestigious awards, including a Lifetime Achievement Award from the Women’s Caucus for Art, and in 2015 was voted one of the 50 most powerful people in the art world by both Blouin Art Info and Art+Auction. She received her MA and PhD from the Institute of Fine Arts at New York University.

Charting a shifting role for curators, this title reveals arts professionals as becoming brokers of a sort, mediating the interests of artists, arts institutions, social activists, and museumgoers… The institutional critiques articulated here will move art museums away from longstanding bias, toward exhibiting artists previously excluded… At its most convincing, when citing statistics proving how seldom museums display art by overlooked and marginalized groups, this book will surely energize those already in agreement.
— Library Journal

Parlous political times call for out-of-the-box museum thinking, which is what Ms. Reilly both documents and demands in this how-to handbook for lining up art and real life.
— The New York Times