Mastering Simplicity: A Life in the Kitchen (Hardcover) 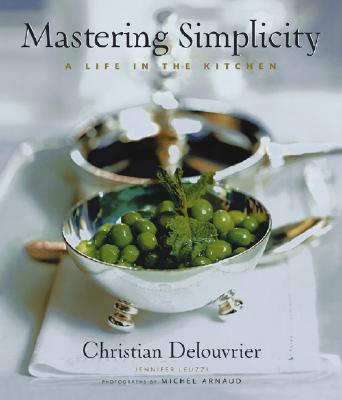 A captivating portrait of the life and cooking of Lespinasse's Christian Delouvrier, the four-star chef who has defined French cuisine for the American dining public

Celebrity chefs continue to fascinate growing numbers of increasingly sophisticated foodlovers. Now, Mastering Simplicity puts the spotlight on Christian Delouvrier, one of today's brightest and most distinguished culinary stars, celebrated by Florence Fabricant in the New York Times as "a cook whose entire culinary life is a testament to tradition." Part memoir, part cookbook, it captures the things that have brought Chef Delouvrier to the top of his profession as Executive Chef of the acclaimed four-star restaurant Lespinasse in New York City: his devotion to the best ingredients, his unique blend of techniques, and his mastery of the culinary traditions of southwest France. Chef Delouvrier shares valuable insights on his techniques and the chefs and restaurants that have influenced his style of cooking, along with entertaining anecdotes that bring his experiences to life. At the heart of the book, he shares a variety of his best-loved recipes from around the world, a repertoire of personal favorites that include a delightful Veal Stew (Toulouse), an Upside Down Apple Tart (Paris), and Salmon Cooked in Olive Oil with Arugula Salad and Balsamic Vinegar (New York). Dozens of color and more than 50 black-and-white photographs display finished dishes and capture the life of the chef in his early days in his grandmother's kitchen and on his journey to Lespinasse.

Christian Delouvrier (New York, NY) is Executive Chef at Lespinasse (at the St. Regis Hotel). Trained at the LycÃ©e HÃ´telier of Toulouse, he worked in several Michelin-star restaurants in Paris before moving to New York, where he was a chef at Les CÃ©lÃ©britÃ©s. Jennifer Leuzzi (New York, NY) is a publicist who studied at the Ecole Ritz Escoffier in Paris.

JENNIFER LEUZZI is the president of the Manhattan-based JKL Mediaworks, a culinary consulting firm whose clients have included Conde Nast publications, the Myriad Restaurant Group, and Ford Motor Company. Born and raised in Hawaii, Jennifer cooked in several Michelin-starred restaurants in Paris and is a frequent contributor to Epicurious. She lives in New York City.

MICHEL ARNAUD is an established photographer of architecture, lifestyle, interiors, and portraits. His work has appeared in Vogue, Harper's Bazaar, The New York Times, House & Garden, and other publications. His books include The Chef, the Story, and the Dish and The Artful Chicken. Originally from France, he now lives in New York.