In Pursuit of the Unknown: 17 Equations That Changed the World (Paperback) 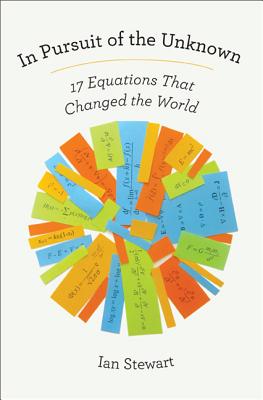 The seventeen equations that form the basis for life as we know it.

Most people are familiar with history's great equations: Newton's Law of Gravity, for instance, or Einstein's theory of relativity. But the way these mathematical breakthroughs have contributed to human progress is seldom appreciated. In In Pursuit of the Unknown, celebrated mathematician Ian Stewart untangles the roots of our most important mathematical statements to show that equations have long been a driving force behind nearly every aspect of our lives.

Using seventeen of our most crucial equations -- including the Wave Equation that allowed engineers to measure a building's response to earthquakes, saving countless lives, and the Black-Scholes model, used by bankers to track the price of financial derivatives over time -- Stewart illustrates that many of the advances we now take for granted were made possible by mathematical discoveries.

An approachable, lively, and informative guide to the mathematical building blocks of modern life, In Pursuit of the Unknown is a penetrating exploration of how we have also used equations to make sense of, and in turn influence, our world.

Ian Stewart is emeritus professor of mathematics at the University of Warwick. His recent books include Calculating the Cosmos, Significant Figures, In Pursuit of the Unknown, and Professor Stewart's Hoard of Mathematical Treasures. He is a fellow of the Royal Society. He lives in Coventry, UK.

"An engaging tour of vital math for a modern world.... [A] wonderfully accessible book."—Scientific American

"Stewart is the finest living math popularizer-a writer who can tackle eye-spraining mathematical topics approachably, and yet dazzle hard-core nerds with new and surprising information. It is hard not to get your money's worth from him, and in a book like this he is at his best because of the very wide ground covered."—Maclean's

"Seemingly basic equations have enabled us to predict eclipses, engineer earthquake-proof buildings, and invent the refrigerator. In this lively volume, mathematician Ian Stewart delves into 17 equations that shape our daily existence, including those dreamed up by the likes of Einstein, Newton, and Erwin Schrödinger."—Discover

"Stewart shares his enthusiasm as well as his knowledge in this tour of ground-breaking equations and the research they supported.... An entertaining and illuminating collection of curious facts and histories suitable for random dipping-in or reading straight through."—Publishers Weekly

"Stewart provides clear, cogent explanations of how the equations work without burdening the reader with cumbersome derivations.... He gives a fascinating explanation of how Newton's laws, when extended to three-body problems, are still used by NASA to calculate the best route from Earth to Mars and have laid the basis for chaos theory. Throughout, Stewart's style is felicitous."—Kirkus Reviews

"Stewart's expertise and his well-developed style (enhanced by a nice sense of humor) make for enjoyable reading.... [A] worthwhile and entertaining book, accessible to all readers. Recommended for anyone interested in the influence of mathematics on the development of science and on the emergence of our current technology-driven society."—Library Journal

"Stewart has managed to produce a remarkably readable, informative and entertaining volume on a subject about which few are as well informed as they would like to be."—Washington Independent Review of Books

"Stewart is a genius in the way he conveys his excitement and sense of wonder.... He has that valuable grasp of not only what it takes to make equations interesting, but also to make science cool."—New York Journal of Books

"Nothing less than a quick tour of the history of scientific thought, from ancient Greece to quantum mechanics and beyond."—Times Higher Education Supplement

"[An] engaging work...An entertaining journey through the development of theoretical mathematics, as well as an informative look at applied science."—Booklist

"If you were a mathlete or have even the slightest interest in figures, Ian Stewart can bring the subject alive for you."—History Wire

"Ian Stewart has penned a book for both sides of the divide with In Pursuit of the Unknown, ably bridging the gap between those daunted and undaunted by the language of equations."—Tulsa Book Review