America, Empire of Liberty: A New History of the United States (Paperback) 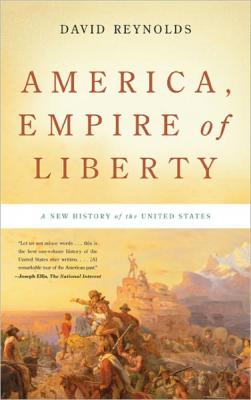 By David Reynolds
$19.99
This book is out of stock indefinitely, unable to order at this time.

"The best one-volume history of the United States ever written" (Joseph J. Ellis)

It was Thomas Jefferson who envisioned the United States as a great "empire of liberty." This paradoxical phrase may be the key to the American saga: How could the anti-empire of 1776 became the world's greatest superpower? And how did the country that offered unmatched liberty nevertheless found its prosperity on slavery and the dispossession of Native Americans?

In this new single-volume history spanning the entire course of US history—from 1776 through the election of Barack Obama—prize-winning historian David Reynolds explains how tensions between empire and liberty have often been resolved by faith—both the evangelical Protestantism that has energized American politics for centuries and the larger faith in American righteousness that has driven the country's expansion.

Written with verve and insight, Empire of Liberty brilliantly depicts America in all of its many contradictions.

David Reynolds is professor of international history at Christ's College, Cambridge. A regular visitor to the United States for forty years, he is the multiple prizewinning author of thirteen books ranging across the modern world, including In Command of History and, most recently, Island Stories. He lives in Cambridge, England.

"Let us not mince words...this is the best one-volume history of the United States ever written....[A] remarkable tour of the American past."—Joseph Ellis, The National Interest

"[T]he best single-volume account of the world's greatest society for many years. Even those of us who think we know America well are reminded anew what an awesome place it is."—Max Hastings, Sunday Times (London)

"An entertaining and fair-minded introduction to American history."—Economist

"Tracing the long dialectic between America's virtuous self-image and its sometimes rapacious actions is a mammoth task but one Reynolds carries off well."—Edward Luce, Financial Times

"An evenhanded distillation of America's story from a singular outside observer."—Kirkus