The Last Human: A Novel (Paperback) 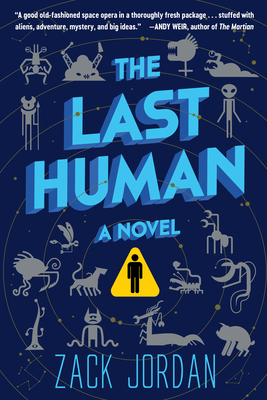 The last human in the universe must battle unfathomable alien intelligences—and confront the truth about humanity—in this ambitious, galaxy-spanning debut

“A good old-fashioned space opera in a thoroughly fresh package.”—Andy Weir, author of The Martian

“Big ideas and believable science amid a roller-coaster ride of aliens, AI, superintelligence, and the future of humanity.”—Dennis E. Taylor, author of We Are Legion

Most days, Sarya doesn’t feel like the most terrifying creature in the galaxy. Most days, she’s got other things on her mind. Like hiding her identity among the hundreds of alien species roaming the corridors of Watertower Station. Or making sure her adoptive mother doesn’t casually eviscerate one of their neighbors. Again.

And most days, she can almost accept that she’ll never know the truth—that she’ll never know why humanity was deemed too dangerous to exist. Or whether she really is—impossibly—the lone survivor of a species destroyed a millennium ago. That is, until an encounter with a bounty hunter and a miles-long kinetic projectile leaves her life and her perspective shattered.

Thrown into the universe at the helm of a stolen ship—with the dubious assistance of a rebellious spacesuit, an android death enthusiast on his sixtieth lifetime, and a ball of fluff with an IQ in the thousands—Sarya begins to uncover an impossible truth. What if humanity’s death and her own existence are simply two moves in a demented cosmic game, one played out by vast alien intellects? Stranger still, what if these mad gods are offering Sarya a seat at their table—and a second chance for humanity?

The Last Human is a sneakily brilliant, gleefully oddball space-opera debut—a masterful play on perspective, intelligence, and free will, wrapped in a rollicking journey through a strange and crowded galaxy.

Zack Jordan is a compulsive learner and creator. He holds half an art degree, two thirds of a music degree, and about a quarter of a philosophy degree. He’s worked on projects for FEMA, the U.S. Army, and the Department of Defense, none of which elevated his security clearance. He was a designer on several video games including World of Tanks and the F.E.A.R. series, but he’s more proud of the indie games and music albums he’s released under the name U.S. Killbotics. He lives in Chicago with his wife Tara, and spends his evenings playing various Super Mario games with their two daughters, London and Brooklyn.

“Easily the most fun read I’ve had all year! Plays out like a kill squad of Bene Gesserit on a spree in Peter Hamilton’s Confederation, using a Hitchhiker’s Guide to navigate.”—Clint McElroy, #1 New York Times bestselling co-author of The Adventure Zone

“If it’s strange-realistic alien perspectives that you seek, The Last Human delivers characters who spring from the page with empathy, danger, cryptic motives, and chills, all of it amid plenty of action and mystery, in a galaxy of wondrous possibilities.”—David Brin, New York Times bestselling author of The Postman and the Uplift Saga

“One of the best SF books I’ve read in a long time.”—Dennis E. Taylor, New York Times bestselling author of We Are Legion and The Singularity Trap

“The Last Human had me at every page. An epic, galaxy-spanning story of intelligence vs superintelligence, set in maybe the greatest sci-fi universe I’ve seen in years.”—Peter Clines, New York Times bestselling author of The Fold and 14

“A work of absolutely reckless imagination. The Last Human is a funny, moving, wildly entertaining space opera about life, the universe, and everything.”—Elan Mastai, author of All Our Wrong Todays

“A wryly funny space opera whose page-turner pace is driven by smart world building, a bold moral calculus, and innovative but weirdly relatable characters. Highly recommended—this is a trip you want to take.”—Scott Hawkins, author of The Library at Mount Char

“[A] rollicking debut . . . Jordan’s deeply considered treatment of various levels of extraterrestrial intelligence will put readers in mind of the work of Neal Asher and appeal to fans of big-idea science fiction.”—Publishers Weekly

“A witty, engaging sf novel for fans of The Hitchhiker’s Guide to the Galaxy . . . ponders serious themes such as classism, lack of freedom, and the meaning of destiny, all while injecting this contemplation with humor.”—Booklist