The Curse of the Werepenguin (Paperback) 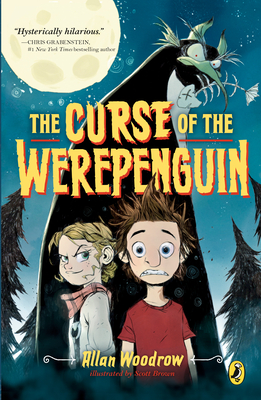 All orphan Bolt Wattle has ever wanted was to find his true family. When a mysterious baron in far-off Brugaria sends for Bolt, he wonders if he's getting closer to finding his long-lost parents. But Baron Chordata appears to be a twelve-year-old boy who wears tuxedos all the time, shouts at everyone, and forbids Bolt from asking questions. Things couldn't get any worse . . . until midnight, when the Baron bites Bolt and turns him into a half boy, half penguin. Then things really couldn't get worse-- nope, wait, they get a lot worse. With the help and hindrance of a plucky girl who just might be the world's greatest bandit, a whale cult led by a man whose weapon is a stale loaf of French bread, and a sinister but friendly fortune-teller who can't stop cackling, Bolt's on a quest to reverse the curse, return to human form, and stop the Baron from taking over the country of Brugaria with his army of mind-controlled penguins in what might be the weirdest--and funniest--middle-grade novel you've ever read.

Allan Woodrow is the author of many books including The Pet War, Class Dismissed, Unschooled, Field Tripped, and now, inspired by Dracula, old werewolf movies, Young Frankenstein, and an odd affection for fish sticks, The Curse of the Werepenguin. When Allan isn't writing, or noshing on breading-coated seafood, he's often presenting to schools, libraries, and conferences. You can learn more about Allan at allanwoodrow.com

Scott has produced work for television commercials, magazines, toys and comics. He spends his free time at his drafting board working on creations of his own. Originally from the seaport of Gloucester, Massachusetts, Scott currently resides on the South-west gulf coast of Florida (he can't stand living too far from the ocean) with his wife, two daughters and a rather affable pug named Linus Van Pelt.

"Imagine Mary Shelley had a preoccupation with zoos, a sense of humor and bad allergies, then commiserated with Roald Dahl and Mel Brooks to write a story for upper elementary school kids, and you would have The Curse of the Werepenguin."--NPR

"Delightfully wacky, cleverly absurd, and frighteningly hilarious. This book is so much fun you’re guaranteed to have a blast reading it!" —Chris Rylander, New York Times bestselling author

"This series opener's overall outrageous sense of humor has a high appeal. As irreverent, sarcastic, and strange as murderous, barking penguins." —Kirkus Reviews