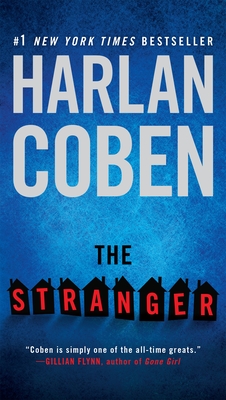 A secret destroys a man’s perfect life and sends him on a collision course with a deadly conspiracy in this shocking thriller from #1 New York Times bestselling author Harlan Coben.

The Stranger appears out of nowhere, perhaps in a bar, or a parking lot, or at the grocery store. Their identity is unknown. Their motives are unclear. Their information is undeniable. Then they whisper a few words in your ear and disappear, leaving you picking up the pieces of your shattered world...

Adam Price has a lot to lose: a comfortable marriage to a beautiful woman, two wonderful sons, and all the trappings of the American Dream: a big house, a good job, a seemingly perfect life.

Then he runs into the Stranger. When he learns a devastating secret about his wife, Corinne, he confronts her, and the mirage of perfection disappears as if it never existed at all. Soon Adam finds himself tangled in something far darker than even Corinne's deception, and realizes that if he doesn't make exactly the right moves, the conspiracy he’s stumbled into will not only ruin lives—it will end them.

HARLAN COBEN is the #1 New York Times and international bestselling author of more than thirty novels, including Run Away, Don’t Let Go, Home, and Fool Me Once, as well as the award-winning Myron Bolitar series. Coben has more than seventy million books in print in more than forty languages worldwide. The winner of the Edgar, Shamus, and Anthony Awards, he lives in New Jersey.

Praise for The Stranger

“Coben describes Adam’s search for the truth behind these allegations—and the identity of the person who made them—with masterly skill, springing surprises, raising stakes, seamlessly integrating other victims of the ‘stranger’ into Adam’s tale. He’s also a smooth, funny writer.”—New York Times Book Review

“This page-turner is one stranger that readers will want to meet.”—Associated Press

“Coben’s latest stand-alone is a great story for people who like to examine the ephemeral nature of those strings that bind our dreams to our reality.”—Library Journal

“The Stranger isn’t just a great thriller, it’s a stunningly effective, probative novel about one man’s search, essentially, for his own identity...Flat-out great and not to be missed.”—Providence Journal

“Another suspenseful thriller whose gripping and intricate plot is completely plausible, and chilling.”—The Huffington Post

“Coben can always be relied on to generate thrills from the simplest premises, but his finest tales maintain a core of logic throughout the twists. This 100-proof nightmare ranks among his most potent.”—Kirkus Reviews

“The startling climax reinforces the novel’s theme that the trappings of the American dream—affluence, fine home, family—don’t necessarily protect one from violence...[The Stranger] carries his trademark asset: a plot that pretty much defies readers to guess the outcome.”—The Columbus Dispatch