99: Stories of the Game (Hardcover) 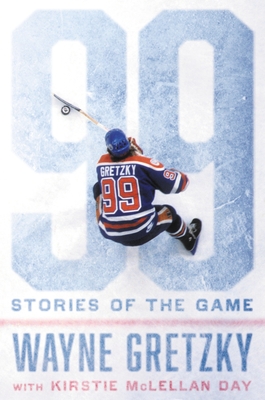 In this sports memoir, Wayne Gretzky weaves memories of his legendary career with an inside look at professional hockey and the heroes and stories that inspired him.

From minor-hockey phenomenon to Hall of Fame sensation, Wayne Gretzky rewrote the record books, his accomplishments becoming the stuff of legend. Dubbed “The Great One,” he is considered by many to be the greatest hockey player who ever lived. No one has seen more of the game than he has—but he has never discussed in depth just what it was he saw.

For the first time, Gretzky discusses candidly what the game looks like to him and introduces us to the people who inspired and motivated him: mentors, teammates, rivals, the famous and the lesser known. Weaving together lives and moments from an extraordinary career, he reflects on the players who inflamed his imagination when he was a kid, the way he himself figured in the dreams of so many who came after; takes us onto the ice and into the dressing rooms to meet the friends who stood by him and the rivals who spurred him to greater heights; shows us some of the famous moments in hockey history through the eyes of someone who regularly made that history.

Warm, direct, and revelatory, it is a book that gives us number 99, the man and the player, like never before.

Wayne Gretzky, nicknamed “The Great One,” is considered by many to be the greatest hockey player ever. He is the leading scorer in NHL history, and is the only NHL player to total more than two hundred points in one season—a feat he accomplished four times. At the time of his retirement in 1999, he held sixty-one separate NHL records (forty regular season, fifteen playoff, and six All-Star)—and still holds most of them today. His honors include 31 Hart, Art Ross, Conn Smythe, Lester B. Pearson, and Lady Byng trophies and awards.

His teams included the Edmonton Oilers (1979–1988, including four Stanley Cups), the Los Angeles Kings (1988–1996, including a Stanley Cup final), the St. Louis Blues (1996), and the New York Rangers (1996–1999). Following his retirement, he became the ninth and final player to be ushered into the Hall of Fame with no waiting period, and the first to have his jersey number retired league-wide.

Among his activities since, he has been minority owner and head coach of the Phoenix Coyotes and executive director of Canada’s 2002 gold medal-winning men’s hockey team, and is a restaurateur, winemaker, and philanthropist with his own Wayne Gretzky Foundation. He lives with his family in Westlake Village, California.

Kirstie McLellan Day is the coauthor of the Canadian bestselling hockey memoirs Cornered (HarperCollins, 2011), with Ron MacLean; Playing with Fire (Triumph, 2010), with Theo Fleury; and Tough Guy (Triumph, 2009), with Bob Probert. She lives in Calgary, Alberta.

Praise for 99: Stories of the Game

“The Great One delivers a personal history of the National Hockey League...Gretzky’s sense of his sport’s history rings clearly throughout these pages, as if he is the tour guide of a museum in which he also has created some of the best art...This enjoyable book provides an overview that will educate longtime fans and relative newcomers alike.”—Kirkus Reviews

“One of the most enjoyable hockey books to be published in many years.”—Booklist (starred review)

“Arguably the best player in the history of hockey, [Gretzky] has written a warm and enthusiastic collection of memories and stories. This book showcases some of hockey’s best moments through the keen eyes of an avid student, lover, and ambassador of the game. VERDICT: Essential for all hockey fans, old and new.”—Library Journal

“Wayne Gretzky’s 99 glides across a lifetime of high sticks and higher stakes.”—Vanity Fair