The Hike: A Novel (Paperback) 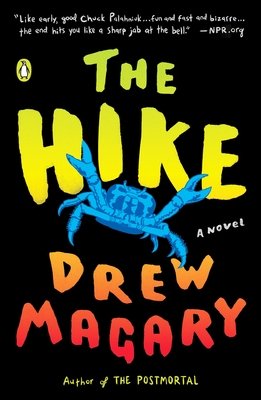 “The Hike just works. It’s like early, good Chuck Palahniuk. . . . Magary underhands a twist in at the end that hits you like a sharp jab at the bell. . . . It’s just that good.” —NPR.org

From the author of The Night the Lights Went Out and The Postmortal, a fantasy saga unlike any you’ve read before, weaving elements of folk tales and video games into a riveting, unforgettable adventure of what a man will endure to return to his family

When Ben, a suburban family man, takes a business trip to rural Pennsylvania, he decides to spend the afternoon before his dinner meeting on a short hike. Once he sets out into the woods behind his hotel, he quickly comes to realize that the path he has chosen cannot be given up easily. With no choice but to move forward, Ben finds himself falling deeper and deeper into a world of man-eating giants, bizarre demons, and colossal insects.

On a quest of epic, life-or-death proportions, Ben finds help comes in some of the most unexpected forms, including a profane crustacean and a variety of magical objects, tools, and potions. Desperate to return to his family, Ben is determined to track down the “Producer,” the creator of the world in which he is being held hostage and the only one who can free him from the path.

At once bitingly funny and emotionally absorbing, Magary’s novel is a remarkably unique addition to the contemporary fantasy genre, one that draws as easily from the world of classic folk tales as it does from video games. In The Hike, Magary takes readers on a daring odyssey away from our day-to-day grind and transports them into an enthralling world propelled by heart, imagination, and survival.

Drew Magary is a correspondent for GQ and a columnist for Deadspin. He is the author of the memoir Someone Could Get Hurt and the novel The Postmortal. His writing has appeared in Maxim, New York, The Atlantic, Bon Appétit, The Huffington Post, the Awl, Gawker, Penthouse, Playboy, Rolling Stone, and on Comedy Central, NPR, NBC, Yahoo!, ESPN, and more. He’s been featured on Good Morning America and has been interviewed by the AV Club, the New York Observer, USA Today, U.S. News & World Report, and many others. He lives in Maryland with his wife and three kids, and is a Chopped champion.

“Drew Magary’s new novel, The Hike, follows Ben, a dad trying to get home after wandering into a parallel universe on a business trip. . . . Buy it for all your friends—everyone loves a good dad odyssey.”
—GQ

“The Hike just works. It’s like early, good Chuck Palahniuk leeched of all bitterness and class warfare—back when Chuck was still weird and tired and furious. It’s like a story you tell yourself on a long drive alone in the dark. It’s fun and fast and bizarre, familiar yet completely other. But the real kicker? Magary underhands a twist in at the end that hits you like a sharp jab at the bell. You'll see stars, I promise, but I don't want to come within a million miles of spoiling for you. It’s just that good.”
—NPR.org

“A page-turner. . . . A successful work of contemporary fantasy. It displays a writer in command of his voice and experimenting with more traditional forms of narrative, while being inventive, funny, and, by the end of the work, quietly profound and touching.”
—BoingBoing

“It’s kind of a more cynical version of The Phantom Tollbooth mixed with a game of Dungeons & Dragons from Community creator Dan Harmon’s podcast Harmontown.”
—Wired, chosen as one of “This Summer’s 14 Must-Read Books”

“At once heartfelt, nerve-wracking, and soul-searching, The Hike is an emotional punch to the gut draped in the trappings of fantasy and psychological horror. It’s a beautifully written novel with thoughtful characters, crunchy descriptions, and crisp action. I loved every single ounce of this book. I’m already looking forward to re-reading it and I only finished it a few days ago. Easily a contender for a slot in my top five favorite books of 2016.”
—Tor.com

“Often hilarious, as you would expect any book by Magary to be, but like The Postmortal there is a real darkness and thoughtfulness to Ben’s journey that will keep you engrossed.”
—i09.com’s Summer Reading Guide

“A gonzo fantasy adventure with a simple premise: a guy gets lost in the woods. Yet with Magary, getting lost means being chased by dog-faced murderers, crashing into an iceberg, almost getting eaten by a giant, and being forced to build a castle for the undead. In short, things get weird.”
—Men's Journal

“The Hike does for casual hiking what Jaws did for swimming in the ocean. . . . An existential, metaphysical journey into what would happen if you ended up in an alternate universe that challenged everything you thought you knew about yourself.”
—GeekDad.com

“A fun and funny book.”
—PopMatters.com

“The Hike reads like a mix of The Odyssey and The Phantom Tollbooth, with the same humor Magary uses on Deadspin. . . . Along the way, Magary’s hero hunts for an enigmatic mastermind, encounters man-eating giants and monsters, and teams up with a talking crab. What starts out as a saga of suburban ennui quickly turns into gripping tale of survival.”
—Washington City Paper

“Among the strangest books I have ever had the pleasure of reading. . . . True to its nature, the story stays unpredictable and weird right up to the climax. Magary’s book is a love letter to fans of gaming, fantasy and adventure, but above all, to open minded readers who can relax and hang on for the ride.”
—BookPage

“A road novel, a psychedelic Pilgrim’s Progress for the 21st Century, Cormac McCarthy after three scotches. . . . I loved every single page of it. . . . [This book] is very good. Tell your friends.”
—The Free Lance-Star

“Magary’s second novel (after The Postmortal) features elements reminiscent of Homer’s Odyssey, Stephen King’s “Dark Tower” series, Lewis Carroll’s Alice in Wonderland, and the PC game King’s Quest. Mostly, it is a reminder of not only how easy it is to get lost but also how difficult it can be to find one’s way back. Fast-paced and immensely entertaining, this is highly recommended for sf fans and adventurous literary readers.”
—Library Journal (starred review)

“In this literary odyssey, Magary combines fascinating dream imagery, assorted video game tropes, and a story structure that’s deliberately predictable (with nods to many other tales of wandering through strange lands before returning home) but still surprising.”
—Publishers Weekly

“Creepy. . . . Magary isn't shy about getting weird fast. . . . [He] even nails the ending with a Twilight Zone twist that would have Rod Serling nodding with approval. An eerie odyssey that would be right at home in the pages of the pulpy Warren comics.”
—Kirkus Reviews

“The Hike is Cormac McCarthy’s Alice in Wonderland—gritty and terrifying but with deliriously surreal twists and turns. There’s not a chapter that doesn’t shock and surprise, and underneath it all is the levity and wit I’ve come to expect of Drew Magary’s writing.”
—Jeffrey Cranor, New York Times bestselling cowriter of Welcome to Night Vale

“The Hike is so much fun, has so much pure velocity, that I didn't realize until it was too late—what I thought was a drumbeat of excitement was actually the novel’s secret, powerful heart. Magary’s new book is a metaphysical thrill ride that will stay with me.”
—Charles Yu, author of How to Live Safely in a Science Fictional Universe

Praise for The Postmortal
“An exciting page turner . . . Drew Magary is an excellent writer. This is his first novel but he tells the story masterfully. . . . The most frightening thing about The Postmortal is that this could really happen—it’s not a supernatural story, but it’s even more terrifying than zombie apocalypse.”
—Mark Frauenfelder, BoingBoing

“Unnerving. . . . An absorbing picture of dawning apocalypse . . . The Postmortal is a suitably chilling entry into the ‘it’s-the-end-of-the-world’ canon.”
—The Austin Chronicle

“The first novel from a popular sports blogger and humorist puts a darkly comic spin on a science fiction premise and hits the sweet spot between Margaret Atwood and Kurt Vonnegut.”
—Ron Hogan, Shelf Awareness