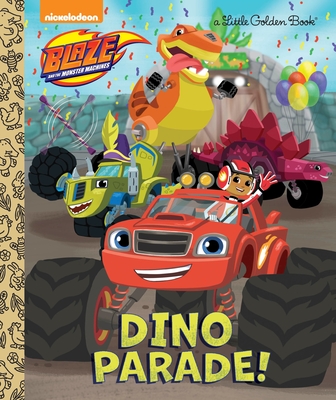 Zeg leads a dinosaur parade through Axle City. But when some of the dinosaurs get lost, it’s up to Blaze and his truck friends to save the day! Boys and girls ages 2 to 5 will love this Little Golden Book based on an exciting episode of Nickelodeon’s Blaze and the Monster Machines!

Mary Tillworth has written more than 100 licensed books for children, including Colors Everywhere! and I Am Buzz Lightyear. She resides in Brooklyn with a long-haired calico cat whom she occasionally shaves, and she is especially proud of her excellent spice rack.

Heather Martinez is an illustrator whose work has appeared in books and television. She has illustrated several titles in the SpongeBob SquarePants series, and was tapped to take over the beloved Little Golden Books series Doc McStuffins. Her work can also be seen in the Golden Books edition of The Phantom Menace. She was nominated for a Primetime Emmy in 2006 for the Nickelodeon movie Escape From Cluster Prime. Her other works include Albert: The Little Tree with Big Dreams, Dino Parade!, and I Am a Princess.