Improbable Destinies: Fate, Chance, and the Future of Evolution (Hardcover) 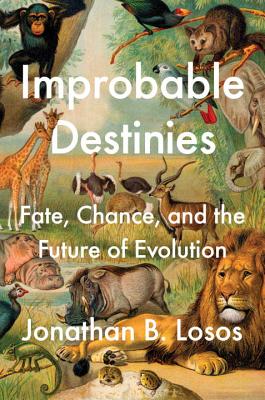 By Jonathan B. Losos
$28.00
This book is out of stock indefinitely, unable to order at this time.

A major new book overturning our assumptions about how evolution works

Earth’s natural history is full of fascinating instances of convergence: phenomena like eyes and wings and tree-climbing lizards that have evolved independently, multiple times. But evolutionary biologists also point out many examples of contingency, cases where the tiniest change—a random mutation or an ancient butterfly sneeze—caused evolution to take a completely different course. What role does each force really play in the constantly changing natural world? Are the plants and animals that exist today, and we humans ourselves, inevitabilities or evolutionary flukes? And what does that say about life on other planets?

Jonathan Losos reveals what the latest breakthroughs in evolutionary biology can tell us about one of the greatest ongoing debates in science. He takes us around the globe to meet the researchers who are solving the deepest mysteries of life on Earth through their work in experimental evolutionary science. Losos himself is one of the leaders in this exciting new field, and he illustrates how experiments with guppies, fruit flies, bacteria, foxes, and field mice, along with his own work with anole lizards on Caribbean islands, are rewinding the tape of life to reveal just how rapid and predictable evolution can be.

Improbable Destinies will change the way we think and talk about evolution. Losos's insights into natural selection and evolutionary change have far-reaching applications for protecting ecosystems, securing our food supply, and fighting off harmful viruses and bacteria. This compelling narrative offers a new understanding of ourselves and our role in the natural world and the cosmos.

Jonathan B. Losos is a biology professor at Washington University and director of the Living Earth Collaborative, a partnership between the university, the Saint Louis Zoo, and the Missouri Botanical Garden. Previously, Losos was a professor of biology at Harvard University and Curator in Herpetology at Harvard’s Museum of Comparative Zoology. Losos is a member of the National Academy of Sciences, the editor in chief of The Princeton Guide to Evolution and How Evolution Shapes Our Lives, and the author of Lizards in an Evolutionary Tree.

“With an ideal combination of clarity and comedy, scholarly caution and infectious enthusiasm, Losos shows us how evolutionary biology opens up for each of us the glorious workings of our world, with surprises around every corner.” —Washington Post

“This is a wonderfully serious book with a lighthearted voice. Is evolution predictable or contingent? Big question. Why do adaptations converge? Big question. Why is the platypus unique? Smaller question, but fun! Read, enjoy, think.” —David Quammen, author of The Song of the Dodo and Spillover

“Packed with stories of capturing lizards in the field, Improbable Destinies explores how we think evolutionary changes happen in populations, from mice to microbes to sticklebacks. Get this for the backyard biologist in your life.” —Popular Science

“Deep, broad, brilliant and thought-provoking. . . . In staggeringly clear and engaging prose, Losos shows us remarkable vignettes of scientists working at personal and professional risk in all sorts of habitats — field, lab and museum — to elucidate stunning mechanisms of evolution. . . . He is one of the premier writers in biology today.” —Nature

“In a refreshingly accessible narrative, laced with piquant anecdotes, Losos underscores the human significance of science affecting not only how we interpret our own place on the planet but also how we envision life in distant galaxies. Wonderfully lucid; singularly engaging.” —Booklist (starred review)

“A thoroughly accessible analysis of whether evolution is one big crapshoot or rather mundanely predictable. No spoilers here, but the evidence presented on both sides makes for some thought-provoking reading.” —Washington Independent Review of Books

“A cheerful, delightfully lucid primer on evolution and the predictive possibilities within the field.” —Kirkus (starred review)

“Every now and then a brilliant book comes along that helps us rethink what we know about a subject. Jonathan B. Losos’ fascinating, compulsively readable Improbable Destinies is just such a book. . . . With vivacious writing and thoughtful, provocative insights, Losos’ captivating study of evolution deserves to be read alongside the books of E.O. Wilson (The Social Conquest of Earth) and Stephen Jay Gould (Wonderful Life).” —BookPage

“Improbable Destinies is one of the best books on evolutionary biology for a broad readership ever written. Its subjects—the unfolding of Earth’s biological history, the precarious nature of human existence, and the likelihood of life on exoplanets—are presented in a detailed, exciting style expected from an authentic scientist and naturalist.” —Edward O. Wilson, University Research Professor Emeritus, Harvard University

“Losos explains both the science and the underlying philosophy of the questions being asked in an accessible and engaging manner . . . The book is as enjoyable as it is informative.” —Publishers Weekly

“Is evolution a story foretold? Or is it little more than the rolls of DNA's dice? In Improbable Destinies, Jonathan Losos tackles these fascinating questions not with empty philosophizing, but with juicy tales from the front lines of scientific research. Drunk flies, fast-evolving lizards, mutating microbes, and hypothetical humanoid dinosaurs all grace the pages of this wonderfully thought-provoking book.” —Carl Zimmer, author of A Planet of Viruses and The Tangled Bank

“Improbable Destinies is a crackling good read, threading rich anecdote into trenchant science. It belongs on the same shelf as I Contain Multitudes, Ed Yong’s gorgeously crafted account of microbes and their critical roles in our bodies; Nick Lane’s dense, groundbreaking work on the origins of life, The Vital Question; and other recent books that grapple with Darwin’s revolution, such as Richard O. Prum’s The Evolution of Beauty and Robert M. Sapolsky’s Behave.” —The Barnes & Noble Review

“A rich, provocative, and very accessible book, Improbable Destinies is an exclusive behind-the-scenes tour of the ecological theater and evolutionary play of life, expertly guided one of its most insightful observers. Jonathan Losos has shone a light on a largely unheralded cast of fascinating creatures and ingenious scientists who are reshaping our view of why life is the way it is.” —Sean B. Carroll, author of The Serengeti Rules and Brave Genius