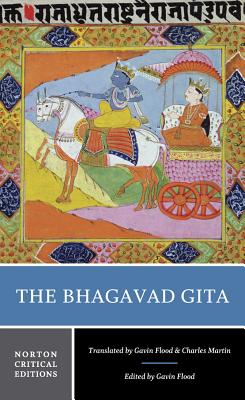 “A true translation whose literary qualities make it stand out from the rest.”

“Here’s a chance to rediscover The Bhagavad Gita in a translation that blends true scholarship with artistry.”

The Bhagavad Gita, the “Song of the Lord,” is an ancient Hindu scripture about virtue presented as a dialogue between Krishna, an incarnation of God, and the warrior Arjuna on the eve of a great battle over succession to the throne. This new verse translation of the classic Sanskrit text combines the skills of leading Hinduist Gavin Flood with the stylistic verve of award-winning poet and translator Charles Martin. The result is a living text that remains true to the extraordinarily influential original. A devotional, literary, and philosophical work of unsurpassed beauty and relevance, The Bhagavad Gita has inspired, among others, Mahatma Gandhi, J. Robert Oppenheimer, T. S. Eliot, Christopher Isherwood, and Aldous Huxley. Its universal themes—life and death, war and peace, and sacrifice—resonate in a West increasingly interested in Eastern religious experiences and the Hindu diaspora. The text is accompanied by a full introduction and by explanatory annotations.

The volume presents seminal analogues and commentaries on The Bhagavad Gita, including central passages from The Shvetashvatara Upanishad as well as commentary spanning eleven centuries by Shankara and Ramanuja (in new translations by Gavin Flood) in addition to the writings of Bal Gangadhar Tilak and Sri Aurobindo.

Five essays by leading Hinduists discuss a wide range of issues related to The Bhagavad Gita from its roots as a religious text to its influence on the practices of yoga and transcendentalism through it ongoing global impact. Contributors include John L. Brockington, Arvind Sharma, Rudolf Otto, Eric J. Sharpe, and C. A. Bayly.

A selected bibliography is included.