Cognitive Neuroscience: The Biology of the Mind (Mixed media product) 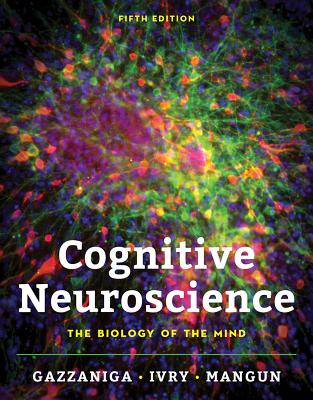 Written by world-renowned researchers, including Michael Gazzaniga, Cognitive Neuroscience remains the gold standard in its field, showcasing the latest discoveries and clinical applications. In its new Fifth Edition, updated material is woven into the narrative of each chapter and featured in new Hot Science and Lessons from the Clinic sections. The presentation is also more accessible and focused as the result of Anatomical Orientation figures, Take-Home Message features, and streamlined chapter openers.

Michael Gazzaniga is the director of the SAGE Center for the Study of Mind at the University of California, Santa Barbara. He received his PhD from the California Institute of Technology, where he worked with Roger Sperry and had primary responsibility for initiating human split-brain research. He has established Centers for Cognitive Neuroscience at Cornell Medical School; the University of California, Davis; and Dartmouth College. He is founder of the Cognitive Neuroscience Institute and founding editor of the Journal of Cognitive Neuroscience. He was a member of the President's Council on Bioethics from 2001 to 2009. He is a member of the American Academy of Arts and Science, the Institute of Medicine, and the National Academy of Sciences.

Richard B. Ivry is Professor of Psychology and Neuroscience at the University of California, Berkeley. He received his Ph.D. from the University of Oregon. His research focuses on the relationship of cognition and action, using the many methods of cognitive neuroscience. Dr. Ivry is a senior editor for the Journal of Cognitive Neuroscience and serves on the editorial boards of a number of other journals. Among his many honors, Dr. Ivry received the Troland Research Award from the National Academy of Sciences in 1997, and was elected a fellow of the Society of Experimental Psychologists in 2003 and the Association for Psychological Science in 2006.