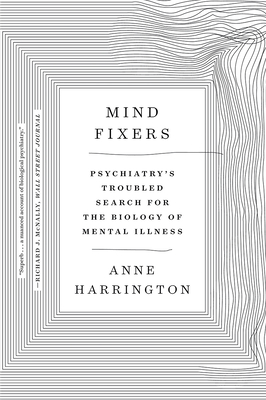 In Mind Fixers, “the preeminent historian of neuroscience” (Science magazine) Anne Harrington explores psychiatry’s repeatedly frustrated efforts to understand mental disorder. She shows that psychiatry’s waxing and waning theories have been shaped not just by developments in the clinic and lab, but also by a surprising range of social factors. Mind Fixers recounts the past and present struggle to make mental illness a biological problem in order to lay the groundwork for creating a better future.

Anne Harrington is the Franklin L. Ford Professor of the History of Science and faculty dean of Pforzheimer House at Harvard University. She is the author of four books, including Mind Fixers and The Cure Within. She lives in Cambridge, Massachusetts.

By charting our fluctuating beliefs about our own minds, [Anne] Harrington effectively tells a story about the twentieth century itself.
— Jerome Groopman - The New Yorker

A compelling story of the ongoing mission to understand and treat our troubled minds.
— Nina MacLaughlin - Boston Globe

Enthralling.… Harrington takes us on a fascinating tour of the up-and-down history of pharmaceutical treatments for psychiatric disorders.
— Alison Abbott - Nature

When it comes to doctoring the body, you have to go back to the 19th century to find a time when the theories were baseless… and the treatments often harmful.… For doctoring the mind, as Anne Harrington’s fine history of psychiatry shows, that point is much more recent.
— Economist

Harrington’s grasp of this story and the clarity with which, with limited moralism, she delivers a tale about the ‘big picture’ of psychiatry and neurology is emblematic of the historian’s craft.
— Stephen T. Casper - Science

A lucid and compelling analysis of the travails of psychiatry as it has attempted to ground its understanding of mental illness in biology.
— Steven E. Hyman, director of the Stanley Center for Psychiatric Research

The story Harrington tells is one of push-and-pull, back-and-forth.… Intricate and winding, though her prose remains clear and crisp.
— Jennifer Szalai - New York Times

A tale of promising roads that turned out to be dead ends, of treatments that seemed miraculous in their day but barbaric in retrospect, of public-health policies that were born in hope but destined for disaster.… Of value to historians of medicine.
— Gary Greenberg - Atlantic