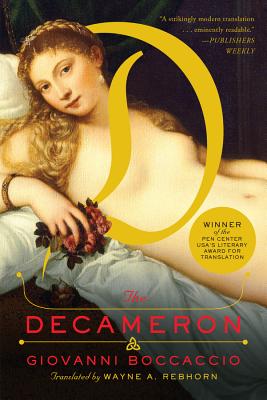 By Giovanni Boccaccio, Wayne A. Rebhorn (Translated by)
$16.95
On Our Shelves Now - Available to Ship to Your Home

“Rebhorn deserves our gratitude for an eminently persuasive translation. . . . I celebrate his accomplishment.”—Edith Grossman

The year is 1348. The Black Death has begun to ravage Europe. Ten young Florentines—seven women and three men—escape the plague-infested city and retreat to the countryside around Fiesole. At their leisure in this isolated and bucolic setting, they spend ten days telling each other stories—tales of romance, tragedy, comedy, and farce—one hundred in all. The result, called by one critic "the greatest short story collection of all time" (Leonard Barkan, Princeton University) is a rich and entertaining celebration of the medley of medieval life.


Witty, earthy, and filled with bawdy irreverence, the one hundred stories of The Decameron offer more than simple escapism; they are also a life-affirming balm for trying times. The Decameron is a joyously comic book that has earned its place in world literature not just because it makes us laugh, but more importantly because it shows us how essential laughter is to the human condition.

Published on the 700th anniversary of Boccaccio’s birth, Wayne A. Rebhorn's new translation of The Decameron introduces a generation of readers to this "rich late-medieval feast" in a "lively, contemporary, American-inflected English" (Stephen Greenblatt, Harvard University) even as it retains the distinctly medieval flavor of Boccaccio's rhetorically expressive prose.

An extensive introduction provides useful details about Boccaccio's historical and cultural milieu, the themes and particularities of the text, and the lines of influence flowing into and out of this towering monument of world literature.

Wayne A. Rebhorn is the Celanese Centennial Professor of English at the University of Texas, where he teaches English, Italian, and comparative literature. His translation of Boccaccio’s Decameron won the 2014 PEN Center USA’s Literary Award for Translation.

The Decameron, an inexhaustibly rich late-medieval feast of narrative cunning, bawdy humor, and sly wit, is a celebration of the sheer pleasure of being alive…With gusto and energy, Wayne Rebhorn has risen to the daunting task of translating this great work into lively, contemporary, American-inflected English.

Wayne A. Rebhorn deserves our gratitude for an eminently persuasive translation of Boccaccio’s collection of tales…I celebrate his accomplishment.
— Edith Grossman, translator of Don Quixote

This superb, powerful, beautifully crafted, and indeed definitive translation of The Decameron introduces readers anew to the sparkling and colorful writing of a pre-Renaissance Italian master.

Fluent and elegant . . . the achievement genuinely honours its original.

A thoughtful piece of work… . This is the version [of The Decameron] I would recommend.