Are We Smart Enough to Know How Smart Animals Are? (Hardcover) 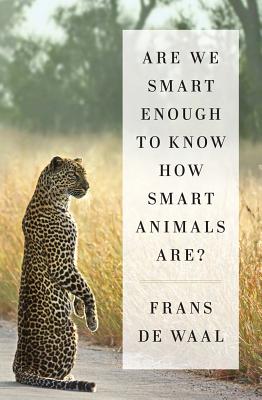 From world-renowned biologist and primatologist Frans de Waal, a groundbreaking work on animal intelligence destined to become a classic.

What separates your mind from an animal’s? Maybe you think it’s your ability to design tools, your sense of self, or your grasp of past and future—all traits that have helped us define ourselves as the planet’s preeminent species. But in recent decades, these claims have eroded, or even been disproven outright, by a revolution in the study of animal cognition. Take the way octopuses use coconut shells as tools; elephants that classify humans by age, gender, and language; or Ayumu, the young male chimpanzee at Kyoto University whose flash memory puts that of humans to shame. Based on research involving crows, dolphins, parrots, sheep, wasps, bats, whales, and of course chimpanzees and bonobos, Frans de Waal explores both the scope and the depth of animal intelligence. He offers a firsthand account of how science has stood traditional behaviorism on its head by revealing how smart animals really are, and how we’ve underestimated their abilities for too long.

People often assume a cognitive ladder, from lower to higher forms, with our own intelligence at the top. But what if it is more like a bush, with cognition taking different forms that are often incomparable to ours? Would you presume yourself dumber than a squirrel because you’re less adept at recalling the locations of hundreds of buried acorns? Or would you judge your perception of your surroundings as more sophisticated than that of a echolocating bat? De Waal reviews the rise and fall of the mechanistic view of animals and opens our minds to the idea that animal minds are far more intricate and complex than we have assumed. De Waal’s landmark work will convince you to rethink everything you thought you knew about animal—and human—intelligence.

A good book. Read it instead of watching TV or playing video games. The whole world will be better as a result.
— Maria Rodale - Daily Beast

When I was growing up, aspiring naturalists or behavioral scientists would be given a copy of Konrad Lorenz’s zoological investigation King Solomon’s Ring to inspire them. With its wide-ranging and thought-provoking content, Are We Smart Enough to Know How Smart Animals Are? is an appropriate 21st-century replacement. If you are at all interested in what it is to be an animal, human or otherwise, you should read this book.

An entertaining, convincing case for assessing each species’s intelligence on its own terms….not only full of information and thought-provoking, it’s also a lot of fun to read.
— Nancy Szokan - The Washington Post

Astonishing...has the makings of a classic--and one fantastic read.
— People

A passionate and convincing case for the sophistication of nonhuman minds.
— Alison Gopnik - The Atlantic

A thoughtful and easy read, packed with information stemming from detailed empirical research, and one of de Waal's most comparative works that goes well beyond the world of nonhuman primates with whom he's most familiar.
— Marc Bekoff - Psychology Today

A beautifully written and delightfully conceived popular science book, written by an eminent researcher who has dedicated his career to making the general public aware of just how smart animals are.
— Nicola Clayton - Science

Walks us through research revealing what a ride range of animal species are actually capable of....it all deals a pretty fierce wallop to our sense of specialness.
— Jon Mooallem - New York Times Book Review

A fascinating history of the study of animal behavior and cognition.
— Bark

This is a remarkable book by a remarkable scientist. Drawing on a growing body of research including his own, de Waal shows that animals, from elephants and chimpanzees to the lowly invertebrates, are not only smarter than we thought, but also engaged in forms of thought we have only begun to understand.
— Edward O. Wilson, University Professor Emeritus, Harvard University

Are We Smart Enough to Know How Smart Animals Are? will completely change your perceptions of the abilities of animals. This book takes the reader on a fascinating journey of discovery into the world of animal problem-solving.

— Temple Grandin, author of Animals in Translation and Animals Make Us Human